A look back at 73 years of Abercrombie Lab 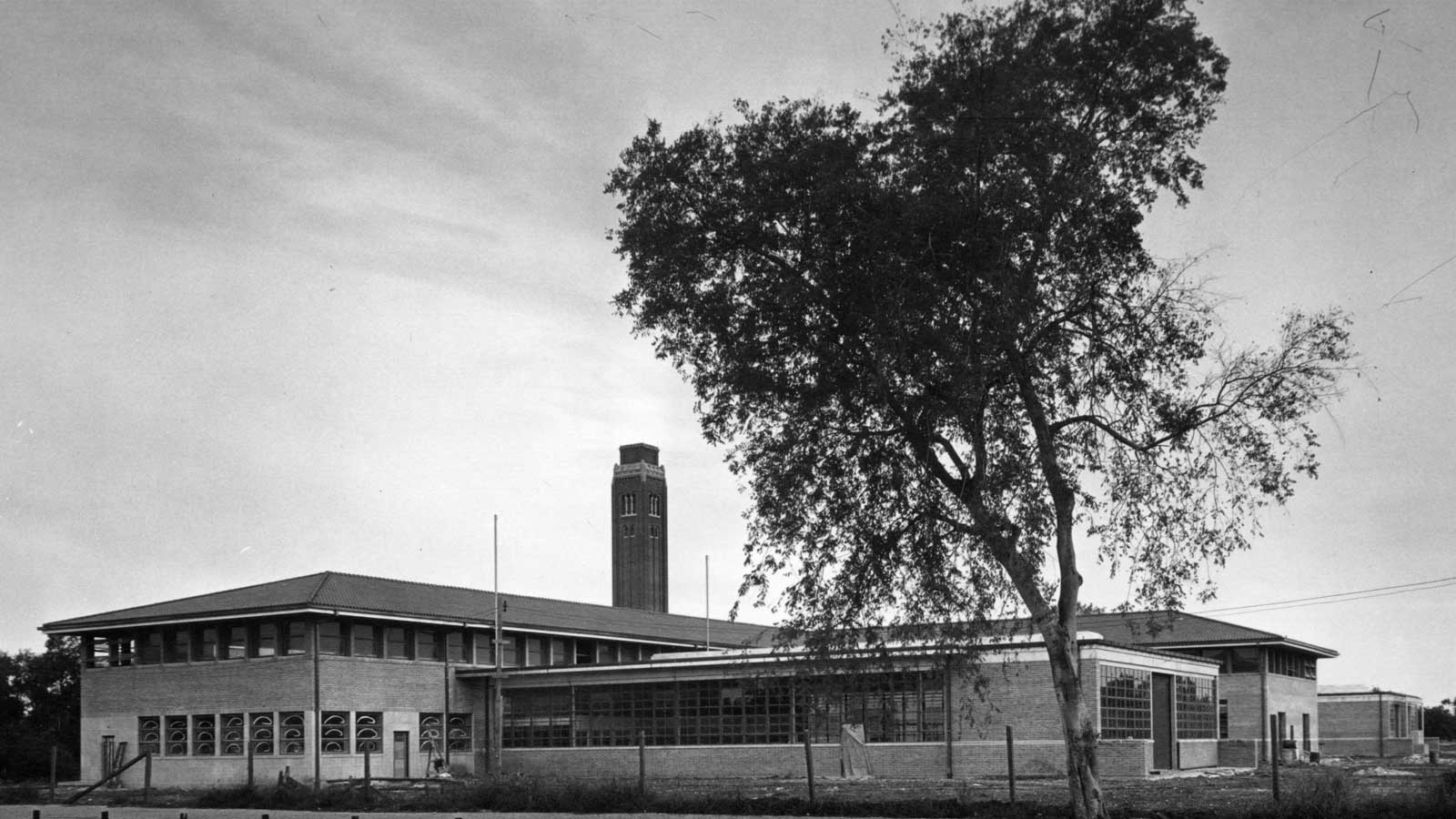 The first public notice of the new science-engineering building to be erected on the Rice University campus came in a brief article in the Houston Post on March 17, 1947.

A “prominent oilman,” J.S. “Mr. Jim” Abercrombie, and his wife Lillie Frank Abercrombie, were giving $500,000 towards its construction. Their daughter Josephine had graduated with a B.A. from Rice the previous year and would later serve on the Board of Trustees. In a private note to Abercrombie, Edgar Odell Lovett, president of Rice from 1908 until his retirement in 1946, described the gift as “delightful beyond measure” and added:

“The beauty of your fine deed is the spirit of it. That spirit is one of the enduring things of our mortality. It will be echoed and re-echoed down the ages from generation to generation, so long as this institution of higher learning shall flourish.”

Construction of Abercrombie Engineering Laboratory, with a final cost of $1,038,157, began later that year and would conclude in late 1948. The postwar boom in can-do optimism throughout the country had begun.

“There was an explosion in growth after World War II, a new era at Rice. What an astonishing workhorse of a building Abercrombie has proved to be. It has been renovated, repurposed, expanded, cobbled together and reconfigured many times. We got our money’s worth out of it.,” said Melissa Kean, who retired last year as Rice Centennial Historian.

Construction of Anderson Hall and the Fondren Library were already underway. No new academic building had been added to campus since 1925, when the Chemistry Building, now Keck Hall, was dedicated. Lovett’s successor as Rice president, William V. Houston, told a reporter:

“The marked increase in enrollment in the science and engineering departments has created an immediate need for the expansion of building facilities and equipment, for both teaching and research in these fields.”

The Houston architectural firm of Staub and Rather designed Abercrombie and the Fondren. The stylized bas-relief of Prometheus beside the main entrance was created by William M. McVey, a Rice football player and architecture major in the Class of 1927. It was intended to symbolize “the function of science and engineering in modern society.”

Demolition of the 73-year-old Abercrombie Lab started in May. Taking its place on the east side of Rice’s Engineering Quadrangle will be a 266,000-square-foot engineering and science building. Discussions are underway about the preservation of the bas-relief.

George Hirasaki, the A.J. Hartsook Professor Emeritus of Chemical and Biomolecular Engineering, earned his Ph.D. in chemical engineering from Rice in 1967 and joined the faculty in 1993.

“The one memory of Abercrombie that has never changed is the sculpture next to the entrance,” he said, “It appeared to be an Egyptian God extracting energy and materials from the sun and from the earth to make products useful for mankind. It symbolized to me that this is what engineering is all about.”

The building’s interior was to be occupied by faculty, staff and students in electrical, mechanical and chemical engineering, as well as the sciences, and included a machine shop, forge and foundry, a metallurgy shop, welding and wood shops, and an internal combustion lab. The entire second floor and the electronics lab on the first floor were air-conditioned — still a novelty in Houston.

Bart Sinclair first entered Abercrombie in the fall semester of 1969. He was a freshman enrolled in Physics 101, a required course for all science and engineering students. Lab reports meant a lot of calculations.

“This was before the days of handheld calculators and easily accessible educational computing, but there was a Wang electronic calculator on the second floor, a desk-sized machine. It may have belonged to chemical engineering. If you were lucky enough, you could get time on it to crunch numbers for your lab reports, which I did whenever I could,” said Sinclair ’73 ’74 ’79, who retired in 2019 as senior associate dean of engineering after 50 years at Rice.

Beginning in 1958, the south end of the second floor of Abercrombie was home to the Rice Computer, known as R1, a 54-bit tagged architecture digital computer completed in 1961. It served as the university’s primary computer until the mid-1960s.

“In my sophomore year, I got a chance to walk through the R1. You literally walked through the computer — the memory was in one bank, computational and control units were in another, and the operator’s console was a separate unit with a built-in paper tape reader,” Sinclair said.

“The memory was a set of 63 William’s tubes, a CRT-like technology, plus an extra tube that was a CRT that would show the programmer where in memory his or her program was executing. I think it was this experience as much as anything that led to me becoming a computer engineer.”

In the 1960s, Abercrombie Lab was also home to the biomedical lab of William Akers, who was instrumental in developing the first artificial heart. He had joined the Rice faculty in 1947 as an assistant professor of chemical engineering. In 1964, Rice President Kenneth Pitzer called a meeting with Akers, five other engineering professors and Dr. Michael DeBakey of Baylor College of Medicine to discuss plans for devising an artificial heart.

That same year Akers founded Rice’s Laboratory for Biomedical Engineering in the Abercrombie Lab, and in May 1965 surgeons at Baylor implanted a working model in a patient, with the artificial pump moving blood from the left atrium to the aorta. The move signaled a radical change in academic disciplines.