ACS award is the highest honor given by the regional affiliate. 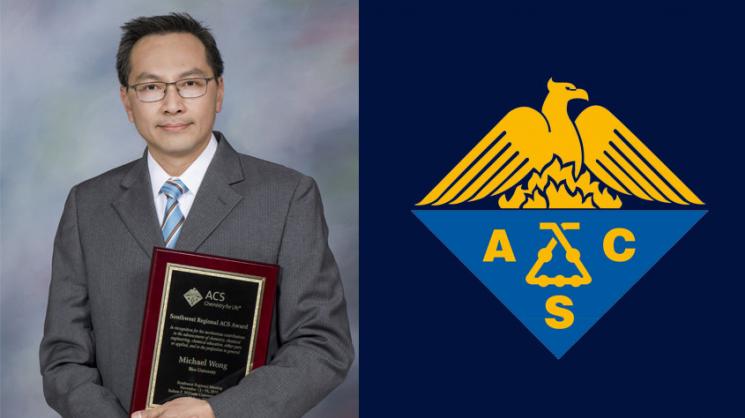 Wong was recognized for his “meritorious contributions to the advancement of chemistry, chemical engineering, chemical education, either pure or applied, to the profession in general.” The award was presented at the joint Southwest Regional and Rocky Mountain Regional meeting held in El Paso in November.

Wong, who joined the Rice faculty in 2001 and became department chair in 2014, is director of the Catalysis and Nanomaterials Laboratory. He is a recognized expert in the chemistry and engineering of materials for the treatment of contaminated water, and in nanoparticle synthesis and assembly techniques.

He pioneered the use of gold-palladium catalysts for the rapid degradation of cancer-causing TCE (trichloroethylene) and other chlorinated chemicals. More recently, his team has designed palladium-based catalysts that break down nitrates and nitrites in drinking water.

Wong earned his Ph.D. in chemical engineering from MIT in 2000, and holds joint appointments at Rice in chemistry, civil and environmental engineering, and in materials science and nanoengineering.

He is a Fellow of ACS and a member of the Army Science Board. He is the research thrust leader on multifunctional nanomaterials in the NSF-funded NEWT (Nanotechnology Enabled Water Treatment) Engineering Research Center, past-chair of ACS’s Division of Catalysis Science and Technology, and serves on the Applied Catalysis B: Environmental editorial board.