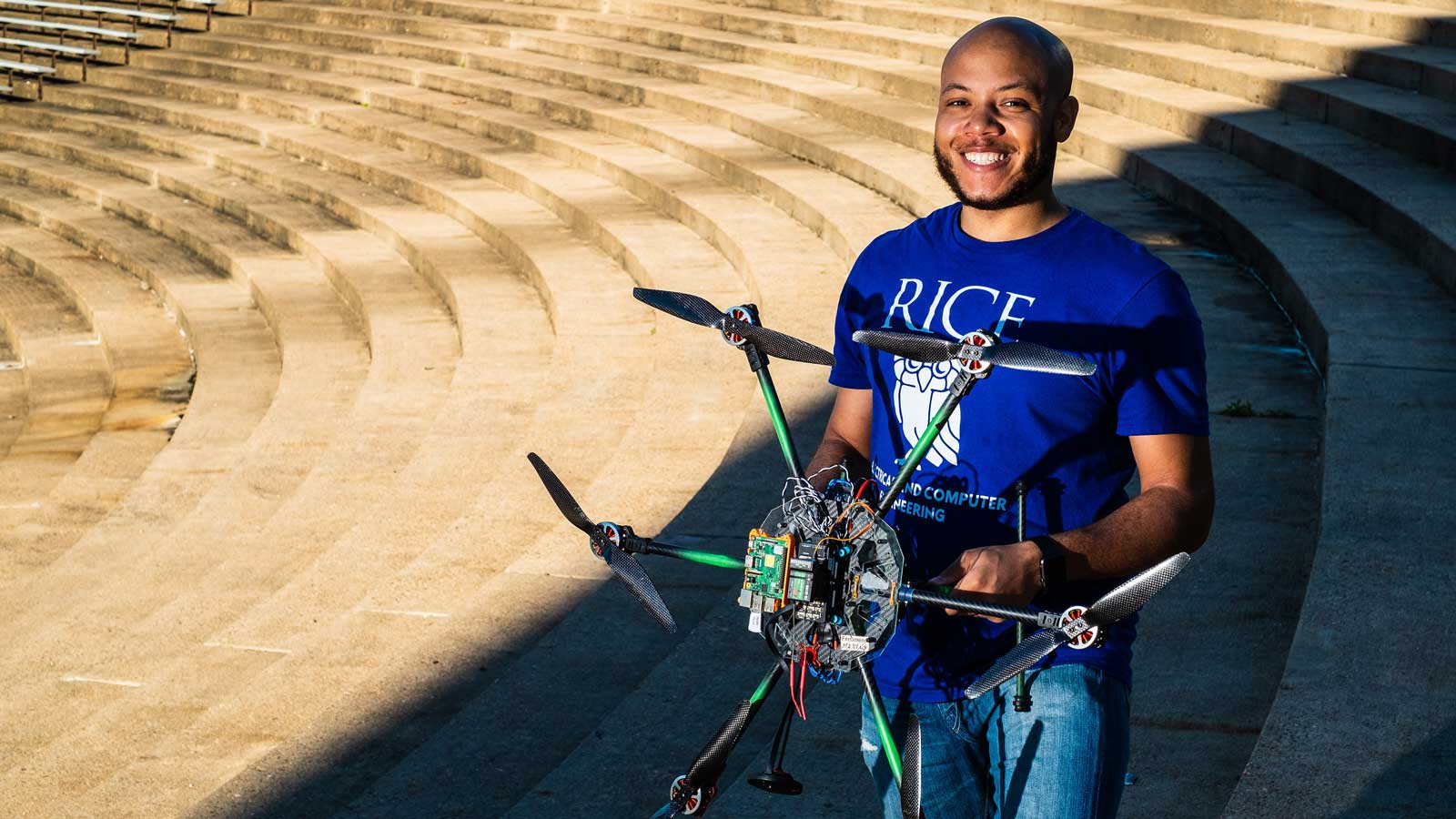 This profile is part of our series of Spotlights on Diversity in Engineering, which recognize individuals, teams or organizations with connections to the Rice University School of Engineering.

Tarence Rice Jr. credits his parents, especially his father, for inspiring his sense of curiosity — a gift that led to his research into drones and wireless communications at Rice University.

“When I was a kid I watched the Science Channel with my Dad. He was interested in those things too. He encouraged my curiosity. I took a circuits class in high school and I thought to myself: If I can design my own radio, what other possibilities are there?” said Rice, a second-year doctoral student in electrical and computer engineering (ECE) at Rice University.

Now Rice works in the Rice Networks Group of Edward Knightly, the Sheafor-Lindsay Professor of ECE and of computer science. “I started with engineering at home with my Dad,” Rice said. “He’s always looking to learn something new. From him I got interested in electronics and the future that will come from that.”

Rice was born in Detroit, where his father works for the Post Office and his mother works for Ford. Neither attended a university. Starting with middle school, Rice’s parents drove him from their Detroit neighborhood to better schools in the suburbs.

“They sacrificed a lot for me. They valued education very highly and knew the predominantly white schools in the suburbs would be better for me. This allowed me to build relationships with other communities of races, ultimately making me a well-rounded person,” Rice said.

“When I was searching for colleges, my Mom guided me to Historically Black Colleges and Universities. It was the perfect match for my matriculation,” said Rice, who earned his B.S. in ECE from Tennessee State University (TSU) in Nashville — a historically black university — in 2019.

While still an undergraduate, Rice had summer internships with DTE Energy, Eaton Corp., Lockheed Martin, Texas Instruments, and Intel Corp., where he worked as a software developer. He received a full-ride scholarship with TSU thanks to a Department of Homeland Security Scientific Leadership Award. This scholarship allowed him to work on machine-learning modeling for new approaches to data-driven applications.

Rice applied for a GEM (Graduate Education for Minorities) fellowship and attended such conferences as Clemson STEM All In and Georgia Tech Focus, which provide funding, networking, and other opportunities for scholars considering advanced degrees.

In 2018, Rice, Baylor College of Medicine and, Houston nonprofit Technology For All received a $1.5 million grant from the National Science Foundation to develop a fleet of autonomous drones to detect and model airborne hazards after extreme weather events. The project, headed by Knightly, collects real-time, high-resolution data about volatile organic compounds released into the atmosphere through explosions or other accidents. As a member of Knightly’s research group, Rice joined the effort.

“As soon as I came to Rice I got to work,” he said. “I was doing the kind of research I have always wanted to do.”
Rice expects to earn his Ph.D. in 2024. His goal, for now, is to enter industry as a researcher in wireless communications, though teaching also attracts him.

“I’d like to be able to give back and help the community. I have a lot to be grateful for. I’m blessed to be at Rice,” he said.