Brings together experts from academia, government, architects and planners to find solutions. 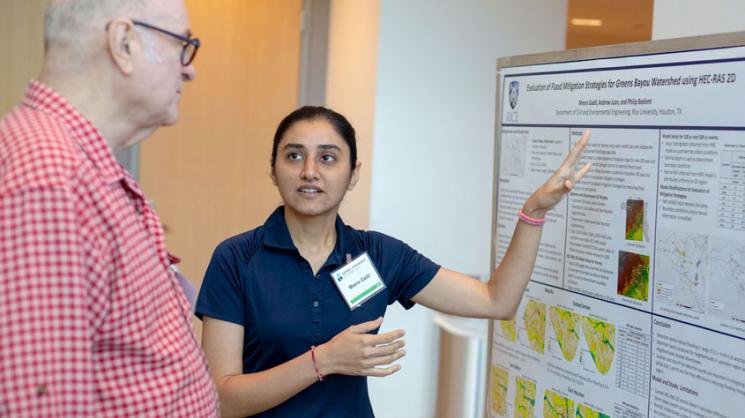 Philip Bedient, founding director of the Center for Severe Storm Prediction, Education and Evacuation from Disasters (SSPEED), thinks of his conference as a collective post-mortem performed on Hurricane Harvey and its aftermath. It brought together many experts and leaders and promoted a 2-day discussion of plans going forward.

“We’ve done some things right. There has been great progress, but we’re a long way from solving the problem,” said Bedient, the Herman Brown Professor of Engineering in Civil and Environmental Engineering at Rice University.

Some 215 people from academia and government, as well as architects and planners, attended “Post-Harvey Era: Resilient Engineering, Infrastructure and Policy,” held Oct. 8-9, 2019 at the Glasscock School of Continuing Studies.

Harvey hit Texas on Aug. 25, 2017, and dropped from 36 to 44 inches of rain over a 2,500-square-mile area. According to the Harris County Flood Control District, Harvey caused $125 billion in damage, flooded an estimated 154,000 homes and thousands of businesses, and claimed more than 100 lives.

The conference focused on the Houston region’s post-Harvey vulnerabilities and how to best prepare for future storms like Harvey, Ike in 2008 and, most recently, Imelda. “There were many folks in the room who had been impacted by Harvey,” Bedient said. “This was more than just another academic conference.”

Things are improving in the flood plains of Greens Bayou (where 24,703 houses flooded during Harvey) and Brays Bayou, two of the most inundated areas. Also hard hit was the far western portion of the region, including the Katy Prairie area and the watersheds of Addicks, Barker and Upper Cypress Creek, where tens of thousands of homes flooded.

The SSPEED Center has helped evaluate construction in Brays Bayou, the regional detention facility in Greens and the additional storage in Upper Cypress with protection for Katy Prairie.

Unlike Fort Bend County, where Bedient lives, Harris County has few pump-storage systems. As a result of stronger drainage policies and pumped storage, Fort Bend experienced relatively moderate flooding during Harvey, nothing on the scale of Houston.

For coastal surge, the SSPEED Center has endorsed the Galveston Bay Park Plan, described by Bedient as “a big-ticket item.” It calls for using soil dredged from the Houston Ship Channel, where a $1 billion deepening and widening project is underway, to create a 25-foot-tall levee along the shipping lane, the nation’s busiest. It would be connected to an existing levee at Texas City, which would be raised to 25 feet from 17 feet. This park plan could be completed as early as 2027 for $3 billion to $6 billion.

Bedient also speculated on the expansion of existing flood warning systems to include major streets and highways, alerting drivers to hazardous conditions. He noted that in 2018, in the wake of Harvey, the NOAA Atlas 14 redefined the amount of rainfall it takes to qualify as 100-year or 500-year events. For Houston, 100-year estimates increased from 13 to 18 inches, equivalent to the old 500-year event. Many projects are now required to use the new design level. Bedient referred to the changes as “the new normal.”

“Houston can become smarter about recurring flood disasters. We have had amazing advances in space exploration, medicine and the energy sector. The smart technology already exists, and there are examples all around us. We just need the will to move forward aggressively,” he said.