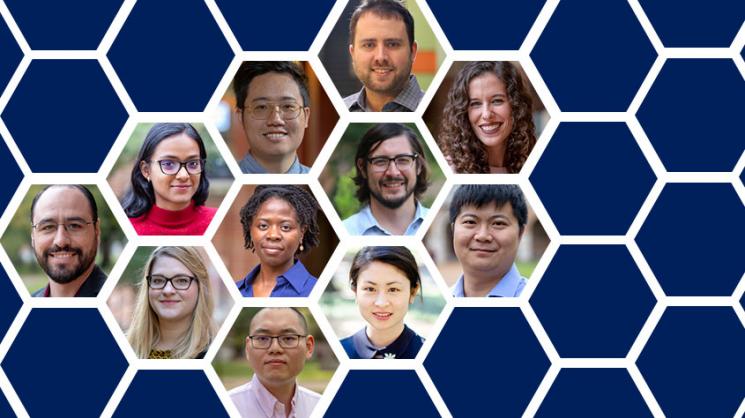 The George R. Brown School of Engineering has launched a Future Faculty Fellows program to support Ph.D. and postdoctoral students who are interested in pursuing academic careers.

“The goal of the program is to help our students become more competitive for faculty positions. Fellows will receive support in preparing all elements of the faculty application and interview,” said Anjli Kumar, administrative research manager for the engineering school.

Tracy Volz, director of the school’s Engineering Communications Program, will aid fellows in preparing their written statements, curriculum vitae and faculty interview presentation. The dean of engineering and chair of the fellow’s department will conduct mock faculty interviews and provide feedback to strengthen interview skills.

Fellows will attend workshops designed to support them as they prepare for faculty interviews. To enhance teaching skills, fellows will complete a practicum in which they teach or co-teach a course within their discipline. The Center for Teaching and Excellence will provide training and observation evaluations. A monetary award of $4,000 will support each fellow for speaking at conferences and university seminars.

The first Future Faculty Fellows are:

Dinler Antunes, a postdoctoral research associate in computer science. He earned a B.S. in biomedicine in 2008 from the Federal University of Rio Grande do Sul in Brazil, and his M.S. (2011) and Ph.D. (2014) from the Postgraduate Program in Genetics and Molecular Biology from the same university. While a doctoral student he applied bioinformatics tools to identify molecular features responsible for immunity against viral proteins, with applications to vaccine design. Now he works with structural prediction and analysis of protein complexes involved in immune responses against cancer cells, in collaboration with the University of Texas MD Anderson Cancer Center.

Suguman Bansal is a fourth-year Ph.D. candidate advised by Moshe Y. Vardi, University Professor in computer science. Her research focuses on applying formal methods to building provably verifiable AI systems. She looks at the formal reasoning of quantitative measures of systems, and uses them to design tools and techniques for enhancing automated verification and synthesis of AI systems. She received the Andrew Ladd Fellowship and a Gold Medal at the ACM Student Research Competition in 2016. She was a visiting fellow at the Simons Institute at the University of California, Berkeley in 2018. She received her M.S. in CS from Rice in 2016 and B.S. in mathematics and CS from Chennai Mathematical Institute in 2014.

Morgan Barnes is a fourth-year Ph.D. student in materials science and nanoengineering, advised by Rafael Verduzco, associate professor of chemical and biomolecular engineering. Barnes earned a B.S. in mechanical engineering from Baylor University in 2013 and an M.S. in MECH and materials science from Duke University in 2015. Her research uses molecular engineering to develop new anisotropic polymers. She works with stimuli-responsive liquid crystal elastomer actuators for applications in soft-robotics and biomedical devices, and as covalent organic frameworks for high-strength films.

Jason Guo is a fifth-year Ph.D. student in bioengineering and works on injectable hydrogels for bone and cartilage repair in the lab of Antonios Mikos, the Louis Calder Professor of Bioengineering, and of Chemical and Biomolecular Engineering. Guo earned his B.S. in biomedical engineering from Northwestern University. He intends to pursue a postdoctoral fellowship, followed by a faculty position where he can lead research in precision medicine and the development of stimuli-responsive materials for tissue repair

Iyabo Lawal is a third-year Ph.D. candidate in mechanical engineering in the Tribomechadynamics Lab of Matthew Brake, assistant professor of MECH. She focuses on the integration of tribology, contact mechanics and structural dynamics. Her research focus is to understand how surface topology changes, caused by friction and wear, at a scale affecting the dynamic performance of a structure. She earned an M.S. in sustainable design from Carnegie Mellon University and an M.S. in MECH from Texas A&M University, and has industry experience in the testing and integration of measurement systems.

Yinlin Li was born in Shanghai, China, and is a postdoctoral research associate in the Polymer Engineering Lab of Rafael Verduzco, associate professor of chemical and biomolecular engineering. He earned a Ph.D. in chemistry from Shanghai Jiao Tong University in 2013 and a second Ph.D. in chemical engineering from Washington State University in 2015. His research focuses on developing multifunctional conjugated polymers for multifunctional organic electronics. Li’s career goal is to become a faculty member who contributes to education and research.

Lu Liu is a postdoctoral research associate in civil and environmental engineering, working in the lab of Qilin Li, professor of CEE. Her research areas include integrated water resources management, systems analysis for integrated water and energy systems, climate change impacts on the water-energy nexus, and urban environmental sustainability. Liu earned her Ph.D. in water resources engineering from the University of Maryland in 2017. Before that she worked as a researcher with the Pacific Northwest National Laboratory, where she focused on developing water modules within integrated assessment models. Her primary focus is developing modeling tools and databases to characterize urban water system and enhance system resiliency.

Canek Phillips is a research scientist in the George R. Brown School of Engineering, where his research focuses on efforts to promote greater equity for underrepresented groups in engineering. He earned his Ph.D. from the Purdue School of Engineering Education in 2016 and worked there as a graduate research assistant in the Engineering Education Lab. He came to Rice as a postdoctoral research fellow in 2017 as part of an NSF-funded study investigating the efficacy of an audio-based method of learning mathematics, in which he now serves as a co-PI. In 2019, he began working as co-PI on an NSF-funded study to reduce barriers in the hiring of underrepresented racial minority faculty members in data science and data engineering fields.

Lauren Taylor is a sixth-year Ph.D. candidate in chemical and biomolecular engineering in the laboratory of Matteo Pasquali, professor of ChBE. She was a 2015 National Defense Science and Engineering Fellow. Her research focuses on understanding the effect of solution processing parameters on the structure and properties of carbon nanotube fibers. She earned her B.S. in chemical engineering from Cornell University in 2014, researching electrolyte materials for intermediate-temperature solid-oxide fuel cells. Her research focuses on optimizing carbon nanotube fiber processing for applications in wearable electronics and sensors.

Michael Weylandt is a fifth-year Ph.D. student in statistics. His research interests include computational statistics, machine learning for high-dimensional time series, and graphical models with applications to finance and neuroimaging. He has served as a mentor for multiple Google Summer of Code projects for the R Project for Statistical Computing. He worked for two years in the Quantitative Research group at Morgan Stanley Investment Management, holds a B.S.E. in operations research and financial engineering from Princeton University and is the recipient of an NSF Graduate Research Fellowship.