The 2022 Engineering Alumni Awards Celebration will be hosted by Talithia Williams '07 '08. 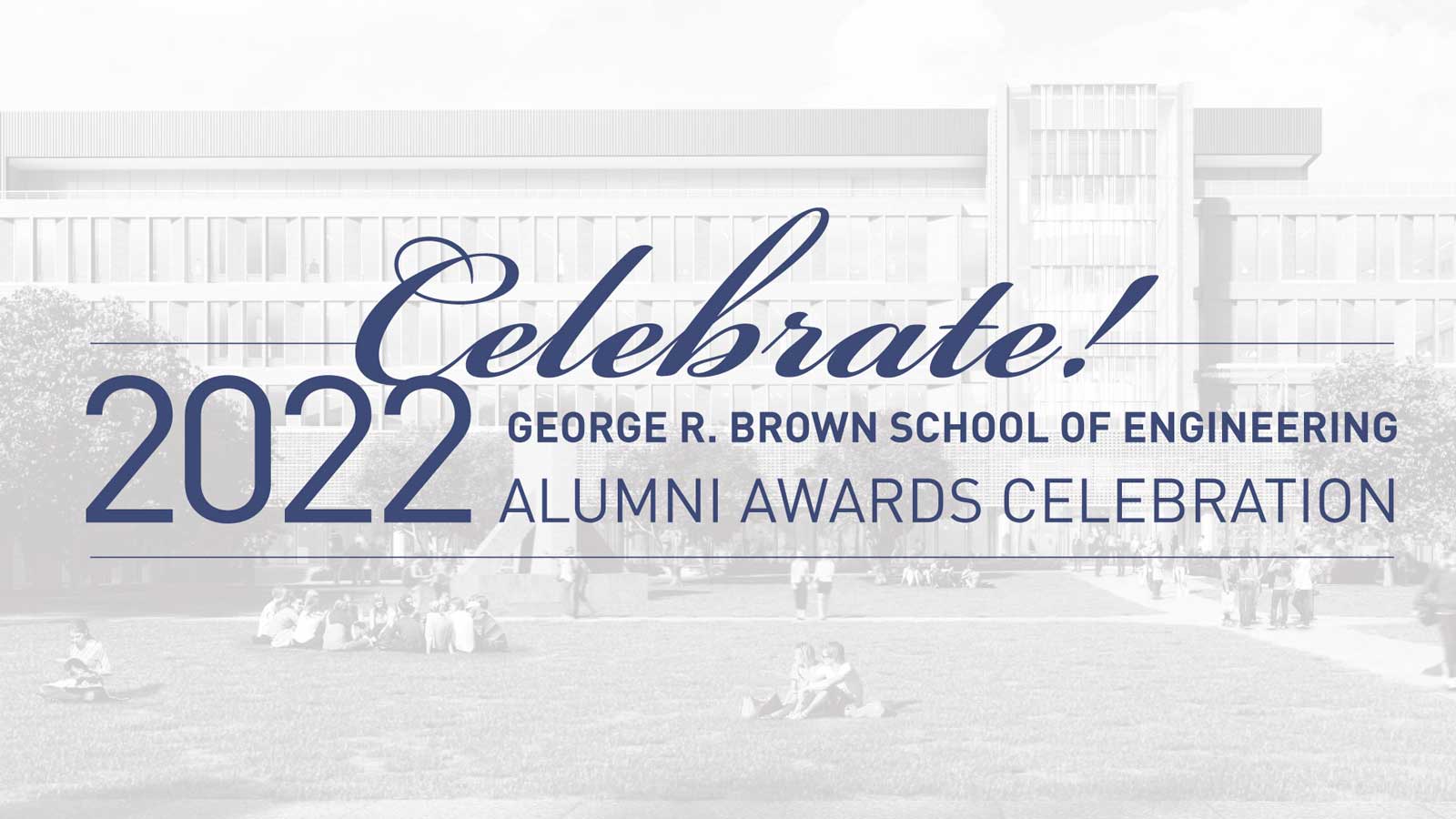 The invitation-only event will be hosted by Talithia Williams, who earned an M.S. and Ph.D. in statistics from Rice in 2007 and 2008, respectively. She is a statistician and professor at Harvey Mudd College, and co-host of the PBS NOVA series “NOVA Wonders.”

The 2022 class of award recipients are:

George Hirasaki earned his B.S. in chemical engineering from Lamar University in 1963 and his Ph.D. in chemical engineering from Rice in 1967. He retired after 26 years with Shell Development and Shell Oil Company, and joined the Rice faculty in 1993, where he conducts research as the A.J. Hartsook Professor Emeritus of Chemical and Biomolecular Engineering. His research in fluid transport through porous media ranged from the microscopic scale intermolecular forces governing wettability to the megascopic scale numerical reservoir simulators for field-wide modeling. A recurring theme throughout his research is the dominance of interfaces in the determination of fluid transport processes.

Burt McMurtry earned his B.A. in engineering and B.S. in electrical engineering from Rice in 1956 and 1957, respectively. He went on to earn an M.S. and Ph.D. in electrical engineering from Stanford in 1959 and 1962, respectively, while working for GTE-Sylvania in laser research and development. After working as an engineer, McMurtry pursued a career in Silicon Valley’s emerging venture capital field. He co-founded several venture capital partnerships, including Technology Venture Investors and Institutional Venture Associates, and helped fund companies including Adaptec, Altera, Compaq, Intuit, Linear Technology Corp., Microsoft, Nellcor, PMC Sierra, Quantum, SpectraLink, Sun Microsystems, Synopsys, VeriFone and Visio. McMurtry died Sept. 2, 2018.

Carlos Ventura earned his M.C.E. and Ph.D. in civil engineering from Rice in 1985. With more than 30 years of experience as a structural engineer, he is director of the Earthquake Engineering Research Facility at the University of British Columbia. His research has focused on structural dynamics and earthquake engineering. He has published more than 400 technical papers related to the seismic behavior of structures, and is a member of the Canadian Academy of Engineering and a fellow of Engineers Canada.

Elle Anderson earned her B.S. in civil engineering from Rice in 2001. She is founder and co-owner of Grounds Anderson, LLC, a woman-owned, Houston-based consulting firm specializing in civil engineering and water resources. She was a four-year Rice women’s tennis letter-winner and was elected in 2021 to the Rice Athletics Hall of Fame. She is an emeritus member of the George R. Brown School of Engineering Advisory Board and a current member of the Rice Board of Trustees.

Bryan Hassin earned a B.S. in computer science and in electrical and computer engineering from Rice in 2001. He earned his master’s degree in computer science from Rice in 2002, and an M.B.A. from the International Institute for Management Development in Lausanne, Switzerland in 2008. He is the co-founder and CEO of Third Derivative, a Denver-based company that brings together investors and climate tech startups.

Dim-Lee Kwong earned his B.S. in physics and M.S. in nuclear engineering from National Tsing Hua University in Taiwan in 1977 and 1979, respectively, and his Ph.D. in electrical engineering from Rice in 1982. He is executive director of the Institute of Microelectronics, a research institute administered by Singapore’s Agency for Science, Technology and Research, and professor of electrical and computer engineering at the National University of Singapore.

Kristian Lum earned her B.A. in statistics and mathematics from Rice in 2006, and an M.S. and Ph.D. in statistical science at Duke University.  She is a senior staff machine learning researcher at Twitter, where she leads research in the Machine Learning Ethics, Transparency and Accountability (META) group. Kristian's work over the last several years has focused on “algorithmic fairness,” particularly in the criminal justice system.

Dr. Steve Xu earned his B.S. in bioengineering from Rice in 2009 and went on to earn a M.S. from the London School of Economics and an M.D. from Harvard University. He is a physician engineer with appointments as medical director of the Querrey Simpson Institute for Bioelectronics at Northwestern University, assistant professor of dermatology and pediatrics at Northwestern’s Feinberg School of Medicine, and assistant professor of biomedical engineering at Northwestern’s McCormick School of Engineering. He also holds the endowed Ruth K. Freinkel Professorship in the Department of Dermatology at Northwestern University. He has written more than 110 peer-reviewed publications, holds 15 pending and granted patents in digital health, medical device development, and medical innovation, and is an NIH- and U.S. Department of Defense-funded investigator.

David Gibbs earned his B.A. in chemical engineering and his M.C.E. from Rice in 1970 and 1971, respectively. He is the president of David K. Gibbs, Inc. Among his many contributions to Rice is the Barbara and David Gibbs Recreation and Wellness Center, which opened in 2009. David’s advocacy and engagement with the Blue Sky Initiative helped create a bold, calculated vision for engineering and science at Rice. This was foundational to many exciting initiatives at Rice today, such as the focus on advanced materials that helped attract the Welch Institute for Advanced Materials to Rice, the establishment of the Center for Transforming Data to Knowledge and initiating Cities of the Future as a research focus for the School of Engineering.

Gene Richeson earned his B.A. and B.S. in electrical engineering from Rice in 1962 and 1963, respectively. He went on to earn an M.S.E.E. from Stanford University in 1965. 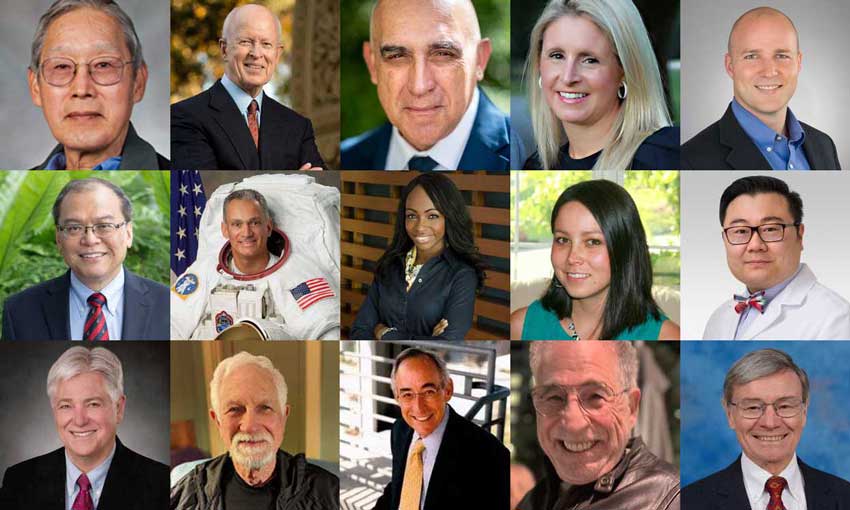 History of the Alumni Awards

The Distinguished Service Medal, established in 2012, recognizes Rice engineering alumni for extraordinary service to the School of Engineering and its alumni community. The medal is intended to recognize exceptionally meritorious service of a visionary, foundational, transformative or sustaining character, reflecting an unusually deep dedication to, or uncommon generosity of time or means in support of, Rice engineering.

The Outstanding Engineering Alumni Award was first presented by the REA in 1974, with George R. Brown, Class of 1920, being the initial recipient. It recognizes Rice engineering alumni for outstanding professional achievement and service to society.

The Outstanding Young Engineering Alumni Award was first given in 1996 by the REA. Its first recipient was William H. White ’86. This award recognizes the achievements of Rice engineering alumni younger than 40.

The Dean’s Appreciation Award, first given in 2018, recognizes outstanding contributions to the George R. Brown School of Engineering by non-engineering  alumni and/or organizations.