'Self-Awareness and the Engineering Leader' is first course many students take to earn RCEL certificate. 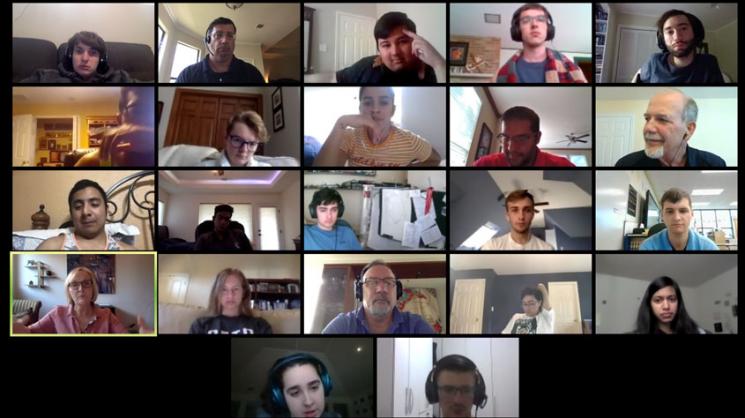 Jeff Ross, who earned his B.S. in civil engineering from Rice in 1975, was role-playing as the new guy at a nuclear-power plant.

Playing his supervisor was Tori Gonzales, a Rice freshman majoring in computer science and cognitive science, and enrolled in RCEL 100, “Self-Awareness and the Engineering Leader.” Ross’ job was to be as unmotivated and wishy-washy as a new employee could possibly be.

“About the new cooling system,” Gonzales said to her new worker. “We want it to be safe for the public. Any ideas?”

“I just want to do what you’ve always done. I’m the new kid on the block,” said Ross, via Zoom, the remote conferencing service. Like the rest of the university, the Rice Center for Engineering Leadership has shifted all of its classes online.

“Today’s lesson is about active listening,” said Kaz Karwowski, the center’s executive director. “There will be times in your career when you’ll have to listen hard, when you’ll have to understand the perspective of another person. Don’t just be waiting for your chance to talk.”

Observing RCEL 100 one afternoon last week was its instructor, David Van Kleeck, professor in the practice of engineering leadership. “Things aren’t always what they seem to be,” he told Gonzales and the other students in the class. “You’re likely to encounter situations where you’re not necessarily getting the whole story.”

RCEL 100 is the first course most students take as they earn their RCEL Certificate in Engineering Leadership. Each week they meet with “Engineers in the Room,” guest professionals and alumni like Ross who share their experience and take part in such exercises as role-playing.

“It’s time for a change around here,” said Gonzales/nuclear-plant supervisor. “All ideas are welcome.”

“I’m just gun-shy,” said Ross/new guy. “What is the culture of this place? What has happened to others who did step out of the box?”

Karwowski, Van Kleeck and Tom Phelan, professor in the practice in engineering leadership, have been leading online classes in “Personal Development for the Engineering Leader” and “Development of High-Performing Engineering Teams.” George Webb, the center’s industry relations director, leads RCEL 430, “Engineering Launch Pad-Pathway” and is hosting multiple guest speakers across many career paths for his class via Zoom. Gayle Moran, RCEL’s lecturer in professional communication, has continues to lead remotely multiple modules in various classes and majors across the school of engineering.

Gonzales, continuing her pitch to the new guy, said: “Sticking to the old ways isn’t always the best way to go about things.”