The grants are given by in situations of 'severe urgency' to collect 'perishable structural damage data.' 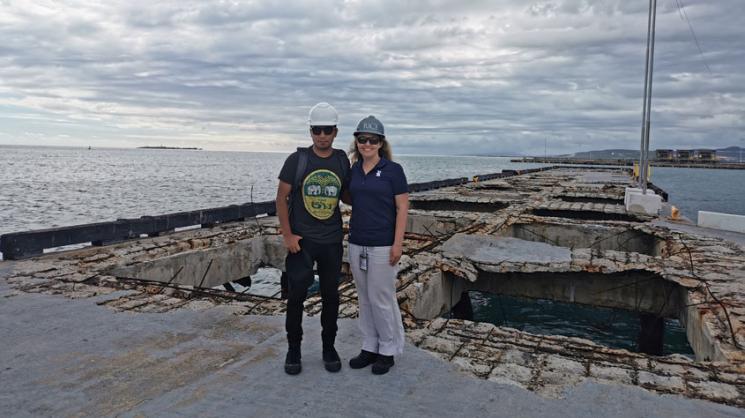 Little more than two years after Hurricane Maria devastated Puerto Rico, killing some 3,000 people and causing an estimated $90 billion in damage to infrastructure, a magnitude-6.4 earthquake hit the island.

“They weren’t prepared. There was no way they could be. We don’t design infrastructure for multiple consecutive hazards,” said Jamie E. Padgett, associate professor of civil and environmental engineering at Rice.

With the aid of a Rapid Response Research (RAPID) grant from the National Science Foundation, Padgett visited Puerto Rico from Feb. 24 to 28 to study the island’s twice-damaged buildings, bridges, port and industrial infrastructure. The grants are given by NSF in situations of “severe urgency” to collect “perishable structural damage data.” Padgett hopes to return for a second visit in late summer.

Hurricane Maria hit in September 2017 and the earthquake on Jan. 7 of this year, with multiple aftershocks. Padgett and Anibal Tafur, a doctoral student in her research group, joined a small team from the University of Connecticut and University of Washington. They focused much of their attention on the southern coastline near Guanica and Ponce. The team conducted visual inspections, used drones and collected geotagged pictures, 3D models and infrared images.

“Some of the infrastructure in Puerto Rico was already deteriorating, especially in the harsh conditions that coastal infrastructure faces. The combination of this with two natural disasters has been overwhelming. They still haven’t recovered,” Padgett said. “The issue of multi-hazard performance is what motivated our study and makes it unique from other field reconnaissance missions.”

Padgett’s husband’s family lives part of the year in Puerto Rico. Their condominium suffered extensive damage, forcing them to move.

“But it’s a really resilient population. The people of Puerto Rice have a wonderfully welcoming culture. They’ve suffered a lot in recent years, but they have excellent engineering knowledge on the island,” said Padgett, who for 10 years has taught CEVE 578: “Earthquake Engineering” at Rice.

“There will always be design tradeoffs and interactions between hazard impacts on structures. For instance, after Maria, some structures suffered washout or erosion of their foundations that had not been repaired. They became even more vulnerable to earthquake damage. Keep in mind that hurricane season is approaching again,” she said.