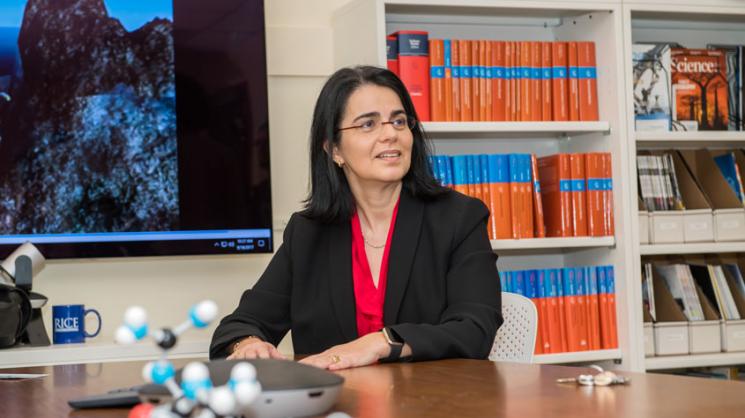 “This is a very well deserved honor for Lydia and a huge honor for all of us in CS and all of Rice,” said Luay Nakhleh, the J. S. Abercrombie Professor of CS and department chair. “With her excellence in research, teaching and service she continues to set a great example for all of us—faculty and students alike—and shows us that excellence can be achieved in all three areas simultaneously.”

Moshe Vardi, University Professor and Karen Ostrum George Distinguished Service Professor in Computational Engineering, who has been Kavraki’s close collaborator for the past decade, praised her “significant impact on a wide range of problems, which include robot manipulation, space robotics, mobile robot localization and drug discovery.”

She will formally receive the honor during the Institute of Electrical and Electronics Engineers International Conference on Robotics and Automation on June 3 at the Palais des Congrès de Paris in Montreal.

A native of Greece, Kavraki received her B.A. in CS from the University of Crete and her Ph.D. in CS from Stanford University. She joined the Rice faculty in 1997 and is also professor of bioengineering, electrical and computer engineering, and mechanical engineering.

She is director of Rice’s Ken Kennedy Institute, has published more than 200 journal articles which have been cited more than 27,800 times, and her h-index is 70, according to Google Scholar. Her most influential paper, published in 1996, “Probabilistic roadmaps for path planning in high-dimensional configuration spaces,” has been cited more than 3,500 times. She is also the author of the textbook Principles of Robot Motion, published by MIT Press.

“Kavraki reconciled the discrete world of computation with the continuous physical world that robots live in through sampling-based, probabilistic algorithms. These algorithms revolutionized the field of robot motion planning and her techniques are now widely used today in research, in teaching and in practice,” said Vijay Kumar, Nemirovsky Family Dean of Engineering at the University of Pennsylvania and recipient of the same award in 2018 and the 2020 IEEE Robotics and Automation Technical Field Award.

She has recently been recognized with BioHouston’s Women in Science Award and the Anita Borg ABIE Technical Leadership Award. In 2017, Kavraki received the ACM Athena Lecturer Award.