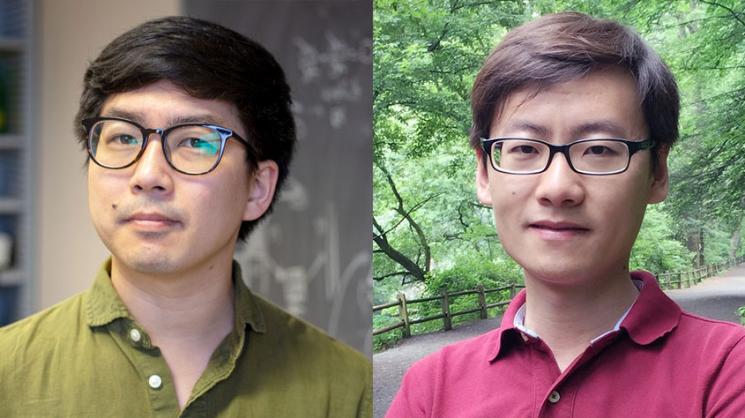 Chan received a five-year, $449,907 grant to develop new technologies for reliable simulations of fluid flow, which are central to scientific fields from environmental and aerospace engineering to solar physics. His proposal is titled “Tailored Entropy Stable Discretizations of Nonlinear Conservation Laws.”

Chen’s five-year, $550,000 award was given for rethinking how to make future networks fundamentally more secure. His proposal is titled “Programmable In-network Security” – Poise, for short.

“Because they are simple and robust,” Chan said, “classical methods from the 1950’s and 60’s are still used to produce most computational fluid simulations. In theory, newer numerical methods can produce higher fidelity simulations at lower computational costs, but they tend to be less stable and more likely to crash. We would like to change this.”

Chan joined the Rice faculty in 2016. He earned a B.A. in CAAM from Rice in 2008, and an M.A. and Ph.D. in computational science, engineering and mathematics from the Oden Institute for Computational Engineering and Sciences at the University of Texas in Austin in 2013.

For two years Chan served as a Pfeiffer Postdoctoral Instructor in CAAM at Rice, and in 2015 went to work as a postdoctoral researcher in mathematics at Virginia Tech, where his mentor was Tim Warburton, formerly a member of the CAAM department at Rice.

Currently, three graduate students take part in Chan’s NSF-funded projects and related research. “Mathematically speaking, we develop numerical methods which reproduce such physical laws as the dissipation of energy. However, our work involves both theoretical and practical considerations. Our goal is creating accurate, efficient and reliable simulations,” Chan said.

As part of his CAREER grant, Chan will also work with the Rice Office of STEM Engagement to create summer research programs for local K-12 teachers and community college students. These six-week programs will promote discovery-based learning of concepts in computational science.

“Our project,” Chen said, “focuses on leveraging new trends in networking hardware to support security inside the network itself, and to provide defenses against a wide variety of attacks.”

Chen earned a B.Eng. in information security from Wuhan University, China, in 2009, and a Ph.D. in computer and information science from the University of Pennsylvania in 2017, the year he joined the Rice faculty.

“We are developing new scientific foundations for network security, which we hope would have a lasting impact for the next-generation network,” Chen said.

“In its ultimate form, a Poise network would toggle a variety of defenses rapidly on and off as attacks flow through, mitigating attacks in real time,” Chen said.

The Faculty Early Career Development (CAREER) Program is an NSF-wide effort in support of early-career faculty who have the potential to serve as academic role models in research and education and to lead advances in their fields. The grants, among the most competitive awarded by the NSF, go to fewer than 400 scholars each year across all disciplines.