How Michail Stamatakis '09 grew into predictive modeling at Rice 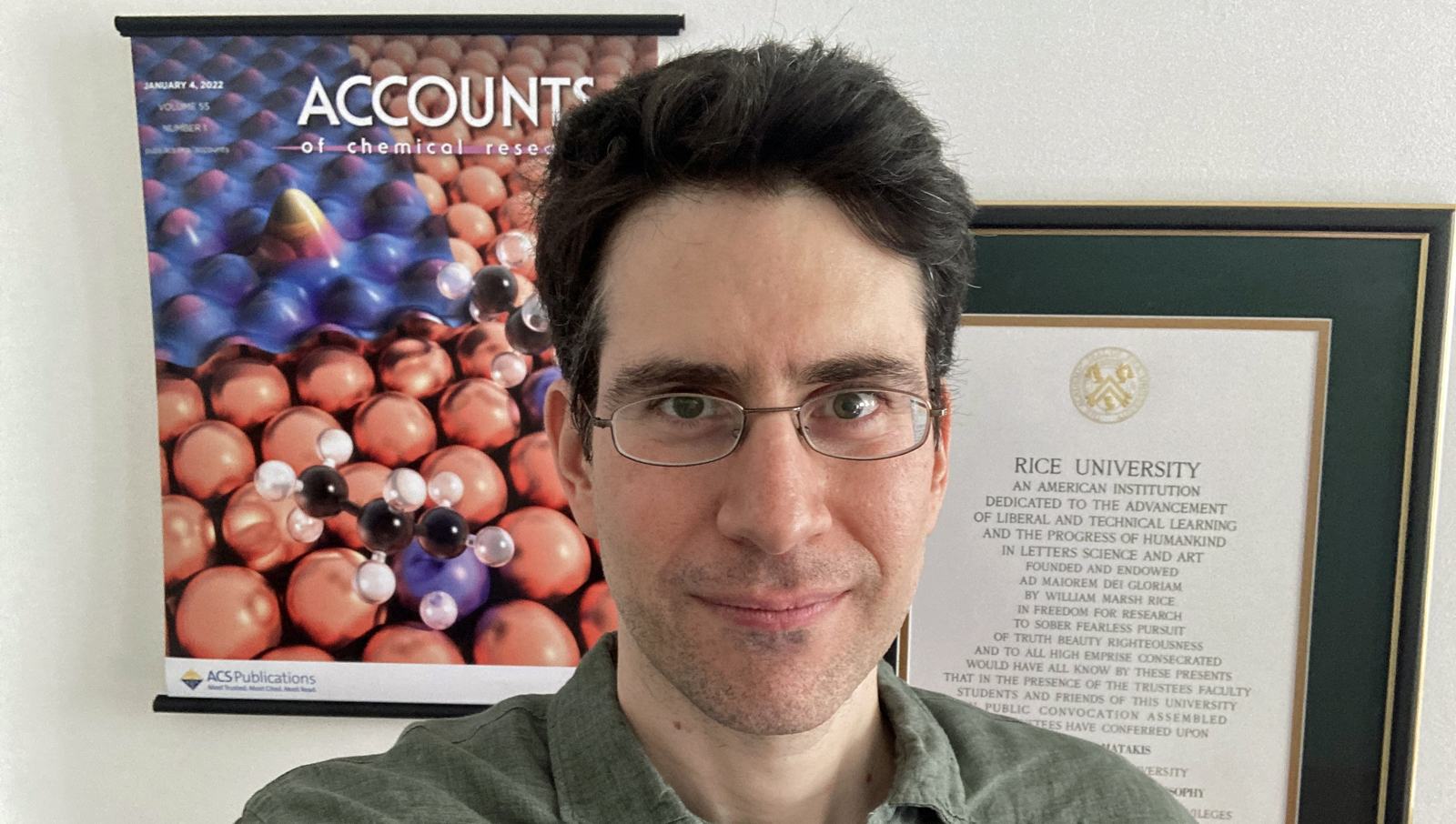 “There is only so much you can do with lab experiments, and then you need predictive modeling,” said Michail Stamatakis, Ph.D. ‘09.

The Rice University chemical and biomolecular engineering alumnus learned to program as an undergraduate at the National Technical University of Athens (Greece) in order to support his Diploma thesis.

“As a Ph.D. student at Rice, I wrote programs that were utilized to make predictions, which were then tested in the lab. My interest and skills in programming continued to grow and I began focusing on scientific software engineering as a postdoc, to create the kind of robust predictive modeling tools I needed for understanding and improving chemical and biomolecular processes,” said Stamatakis.

“In biomolecular engineering research, the challenge is understanding the mechanism and speed by which reactions are occurring in living cells. We can observe the end results in the lab, but what we are really trying to understand, via modeling, is how cell growth and division, temperature, and other conditions impact the changes. And that is where Monte Carlo simulations can be used to make predictions about which biomolecules will emerge, in which way, and how to get the cells to perform a certain way in the end.”

The Monte Carlo prediction method was developed during World War II to improve decision making in the midst of many uncertainties and unknowns. The method has been adopted for use in other ways, such as speeding up the development of new products by predicting outcomes.

Stamatakis said, “During my Ph.D. research, I used the Monte Carlo approach to explore bacterial populations to better learn how heterogeneity influences the synthesis of certain biochemical products. Not every bacterial cell does the same thing as other cells. We use predictions to determine how these differences will impact our desired outcome. If you don’t take these influencers into consideration, you may come up with a design or process that does not yield the type or amount of product you wanted. Those would be inefficient biochemical processes.”

At University College London, where Stamatakis is now an associate professor, his lab uses modeling to guide the development of materials called catalysts, which facilitate chemical transformations at the molecular level. For a given chemistry, such modelling requires the investigation of hundreds of simultaneous reactions, many of which have little or no bearing on the final product.

Predictive modeling, using the Monte Carlo method, helps him better understand the fundamentals of reactions on the catalytic surface, to deduce which of these reactions are relevant, followed by experimental validation. Based on that foundation, he can potentially improve the outcome of the chemical process by engineering the material in a different way or changing its elemental composition.

“In a large design space where we try to create new catalytic materials with different combinations of, say 10 elements, the number of possible outcomes can appear limitless. Rather than spend months or years trying different combinations in the lab, I can make a prediction —using the Monte Carlo method— for how each of those materials will perform and choose the best one. There is no sense in wasting time on the materials that will not perform the way we want!”

To explain this blend of predictions, programming, and chemical processes, Stamatakis leans on lessons he learned at Rice. He said he was fortunate to have an advisor who sent him to conferences early in his Ph.D. program, forcing Stamatakis to communicate with other researchers and other audiences.

“Strong and clear communication comes with experience,” he said. “In addition to sending me to conferences, my advisor also spent a lot of time helping edit my papers. But what was really key was the CAIN Project that introduced engineers to professional communication coaches. I remember being one of the last few people who completed the series of lectures and thesis writing workshops before the CAIN Project ended.”

“Not only did we learn how to structure our papers and become better writers, we also had one-on-one sessions with Dr. Jan Hewitt, who was great at reading our texts and spotting weaknesses. A typical mistake for our group was writing, for instance, ‘This helps us develop new algorithms.’ Immediately, Dr. Hewitt would ask, ‘And what does THIS refer to?’ We had to go back and clarify. That was surprising to most of us; we weren’t used to writing in such a specific way.”

“Dr. Hewitt also taught us to break down our concepts into individual paragraphs, not pack three concepts into a single paragraph like I had been doing. Best of all, it was our own text that Dr. Hewitt went through paragraph by paragraph, sentence by sentence. Even though she was not a biologist or physicist by training, she had given so many workshops for engineers that she was really good at pointing out deficiencies.”

Stamatakis uses the same approach with his own students, when they give him a draft to review or set up a mock presentation before a conference. Sharing information means considering not just the information the research has produced but also how to put that information on paper or a screen in such a way that others can understand it.

“The way we think is different than the way we read or present papers. Scientists make connections between radically different concepts. Knowledge is often a very convoluted network of concepts and relational properties from here to there, like a messy nest. To take this complicated network down to a paper or slide requires the researcher to disentangle the network in their head and convey it in a linear way where one concept follows another,” said Stamatakis.

He said communicating science and engineering concepts takes practice and recommends beginning by explaining even the most basic or fundamental concepts to a non-technical audience like friends or family members. Writers and presenters should expect to revise a first draft several times.

“Each time you review a paper or a presentation, determine if the current draft flows in a logical order. Unexperienced paper writers and presenters tend to jump from one thing to another, or dive into concepts without preparing the audience,” said Stamatakis.

“So reverse, review, revise until you can both inform the audience and keep them engaged. In presentations, I sometimes see people using too much text, sharing too many results and complicated diagrams. A leaner presentation with fewer points will engage the audience more fully, so, keep the presentation on a level appropriate for them. It is the same for papers – consider first if you are writing for a technical journal or an engaging piece of work for dissemination to the public. Either way, introduce concepts in a way that flows and makes logical sense.”

He discovered images to be the best way to engage non-technical audiences in aspects of his own work and because he invents new materials, he had to learn to create his own graphical representations.

“I enjoy making colorful illustrations of the molecular structures we work on, and several of these illustrations have been featured on journal covers. Remember to use color! Nice graphics and images that convey the concept can save hundreds of words.”

This story is part of a series of profiles for the ACTIVATE Engineering Communication program.