How Camille Little '20 found her way to data science

Thanks to D2K and Genevera Allen, the ECE alumna and current PhD student is pursuing her passion. 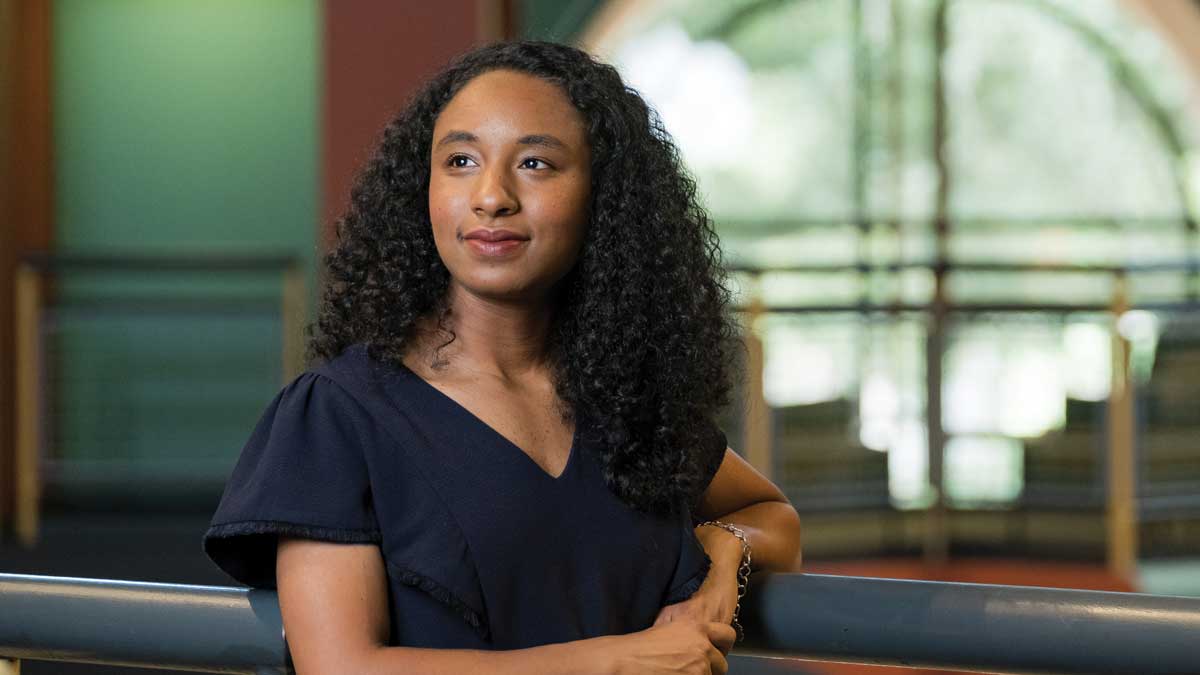 “You work hard to tell yourself you’re as good as everyone else. Then you have other people telling you the opposite. You tend to internalize those messages.”

Camille Little is talking about her experience in public schools. She was smart, good at math and black, with parents who encouraged her to succeed. This year she graduated from Rice with a B.A. in statistics (STAT), and now she’s a first-year doctoral student in electrical and computer engineering (ECE).

“Usually, I was the only black student in the class and some of my teachers held me back. They graded me down. They placed me in the lower group. It happened again in seventh grade, and it deeply affected me. They wouldn’t recommend me for the more advanced classes,” Little said.

Little was born and raised in West Bloomfield, Mich., about 25 miles northwest of Detroit and part of its metropolitan area. Her mother, Melinda Little, teaches kindergarten and first grade. Her father, Vincent Little, earned a degree in computer science from Morehouse College, the historically black men’s school in Atlanta, and works as an information technology manager.

Camille’s brother, Austin Little, graduated from Morehouse with a B.S. in physics in 2019 and now works as an analyst at Deloitte Consulting in Atlanta.

As a little girl, Little had a bent for math and science, a gift encouraged by her parents. “In school, I was really good at doing math problems,” Little said. “I liked it. My love for math built up my confidence.”

For high school, Little’s parents sent her to the prep school Phillips Academy in Andover, Ma. Overall she enjoyed her high school experience, but problems persisted. “Andover was elite, sure, but also elitist,” she said. “It was snobby.”

Little entered Rice intending to major in chemical engineering, but after taking two coding classes her original attachment to math tugged at her. That’s when she decided to switch to statistics.

“It was a great decision for me. I didn’t want to just do coding but I knew my real passion was in math,” she said.

Little came to Rice on a sports scholarship and joined the women’s varsity track and field team. For three years she competed in the long jump, 100-meter dash, the 200-meter 4x1 relay, and the 4x4 relay at the Division I level. She was named an Honor Student Athlete for maintaining a grade-point average at 3.00 or higher. After her junior year, Little decided to withdraw from track and devote her senior year to academics.

While an undergraduate she had summer internships with Schlumberger and Eli Lilly and Co. Last December, Little was part of the team that presented its research project at the Data to Knowledge Symposium: “Using Natural Language Processing Techniques to Detect Oil Well Failures.”

That’s when she got to know Genevera Allen, associate professor of ECE, of STAT and of computer science. Thanks in part to Allen, Little switched to ECE for her graduate school major.

“STAT was not the best fit for me. Now I’m following the data science track in ECE. What I really want to pursue is data science as it applies to health and medicine. That’s really where my passion is,” she said.

In her freshman year, Little had joined the Rice chapter of the National Society of Black Engineers (NSBE). As secretary, she kept minutes during meetings and collected job and internship openings for the chapter’s weekly newsletter. As NSBE outreach senator, she helped found the NSBE Jr. chapter. She recruited more than 40 high-school students and planned a campus tour for Yates High School students.

The following year she served as the NSBE’s fundraising senator, helping to increase the amount of funds raised from $500 to $18,000. She designed a nine-page corporate sponsorship packet for distribution among potential sponsors. In her senior year, Little was elected president of NSBE’s Rice chapter, managing an executive board of 10 members. Since last May, Little has been the TORCH (Technical Outreach Community Help) chair of the Region V National NSBE.

“NSBE is one of the ways I can give back to the community. Young black students sometimes get lost and don’t know how to find the path that I eventually found. I think I can help,” she said.