Carol Haddock '91 oversees the city’s water and wastewater systems, as well as its street and storm drainage systems. 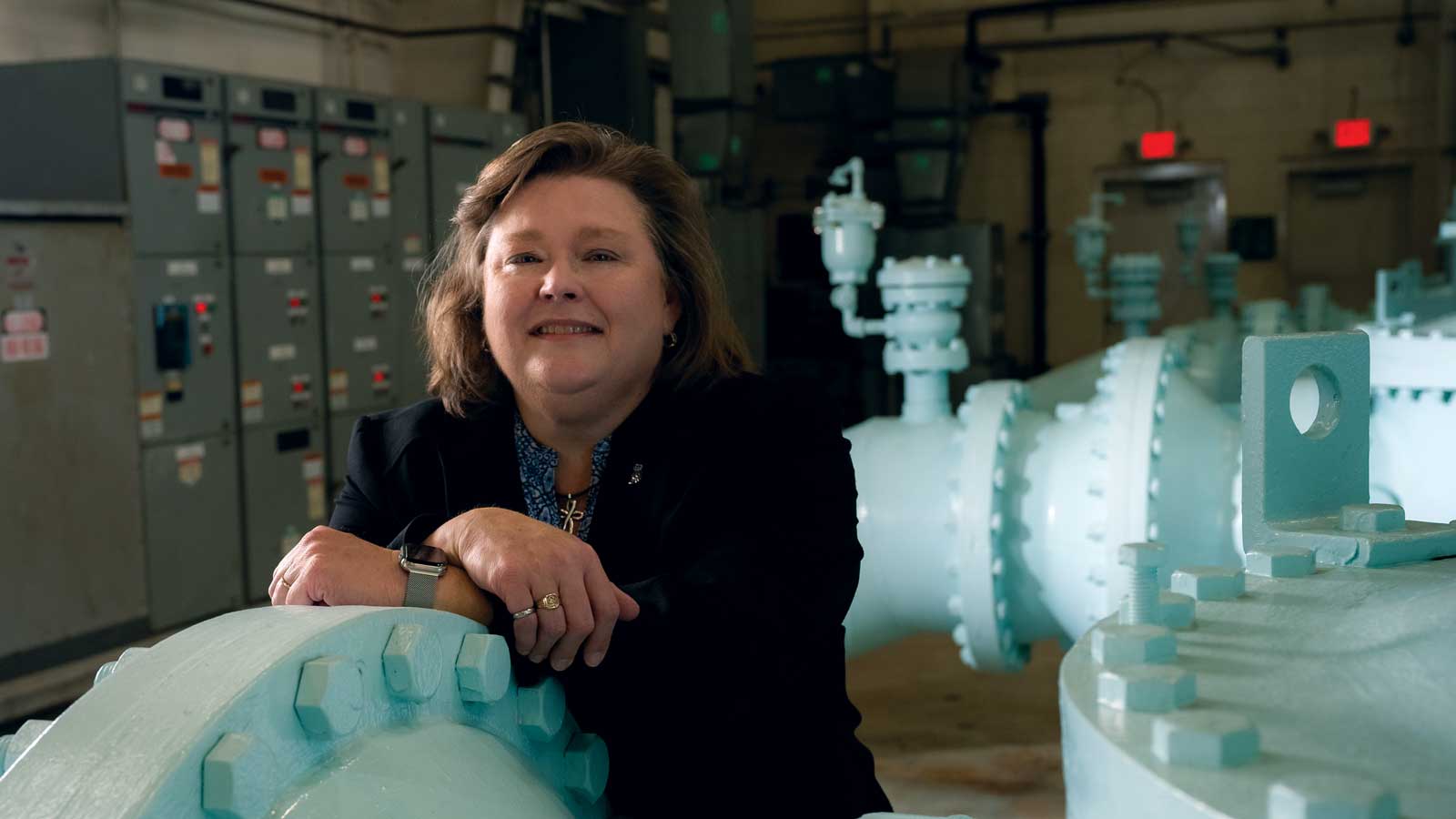 This story originally appeared in the 2021 issue of Rice Engineering Magazine.

From her earliest days, water has flowed through Carol Ellinger Haddock’s (’91) life like a blessing and a curse.

“We heard people say, ‘The river is coming down.’ That was the expression they used. The river was running high. We would go out and watch it,” said Haddock, who grew up in Uvalde, in the Hill Country of Texas.

Now, as Houston’s director of public works, Haddock oversees the city’s water and wastewater systems, and its street and storm drainage systems. “Yes, a big part of this job is water. That means everything from clean drinking water to making sure the infrastructure is ready to deal with the next hurricane,” said Haddock, who earned her bachelor’s degree from Rice in civil engineering in 1991.

Haddock’s department has an annual operating budget of some $2.1 billion and a capital budget of almost a billion dollars. It has more than 3,900 employees and is the largest American Public Works-accredited agency in the United States.

“We touch the lives of everyone in Houston every day. The sense of responsibility is enormous,” said Haddock, who joined the city in 2005 as a senior assistant director for infrastructure planning and became department director in 2018.

Haddock thinks of herself as a small-town girl with a big-city job. During her early childhood, Haddock’s family lived in several small towns in Texas until they settled in Uvalde. Like many budding engineers, she was building things and competing in math contests. Math always topped her list of interests.

“It’s what I was good at. My parents said they knew I would be an engineer,” said Haddock, who describes coming to Rice as “a humbling experience.”

“Back in Uvalde, I knew I was one of the smartest kids around,” she said. “At Rice, I could be in the same room with 25 other people and all of them were smarter than me. I was out of my comfort zone for the first time.”

At Rice, Haddock was in the MOB (Marching Owl Band) all four years, playing French horn, and was active in the student chapter of the American Society of Civil Engineers (ASCE). Among faculty members, Haddock was especially close to the late John Elwood Merwin, who earned three degrees from Rice, in civil and mechanical engineering, and taught at the university for almost half a century. For a year after graduation, she worked for Philip Bedient, now the Herman Brown Professor of Engineering and chair of the Department of Civil and Environmental Engineering.

“Growing up west of San Antonio, water was part of everybody’s vocabulary. Working in water felt like coming home,” said Haddock, who worked for six years as an assistant project manager for a Houston consulting firm. In 1999 she joined the Harris County Flood Control District as a program manager for the $480 million Brays Bayou watershed project. In her off-hours, Haddock earned a master’s degree in public administration from the University of Houston in 2002.

In 2004, while still working for the county, Haddock was chosen to serve for a year as an ASCE/American Association for the Advancement of Science Congressional Fellow, assigned to the U.S. Senate Committee on Environment and Public Works (“one of my coolest career opportunities”).

“Working in Washington really prepared me for the job I have today. I evaluated project and study requests, drafted policies and set up the tracking tool for the proposed Water Resources Development Act, which was up for renewal that year,” she said.

The following year, Haddock joined the City of Houston’s public works department as a senior assistant director for infrastructure planning. Promotions followed. In 2016-17, she served as deputy director for capital projects, overseeing the work of nearly 400 professionals in the design and construction of a $650-million annual capital improvement plan. There are now 175 projects in design and more than $1.1 billion under construction.

“Historically, engineers were encouraged to avoid politics. Our ethics and scientific approach required us to stay clear of the gray areas. I no longer believe that’s the case. Engineers need to step up and be leaders. We need people with technical knowhow to contribute their expertise, especially in the political arena,” she said.

Like her former teacher and boss at Rice, Philip Bedient, Haddock would like to see more land-use controls put in place in Houston. Development and redevelopment across the city make her job ever more challenging, but she seems to revel in managing people, projects and budgets.

“There are days that are hard, but I also love my job,” she said.