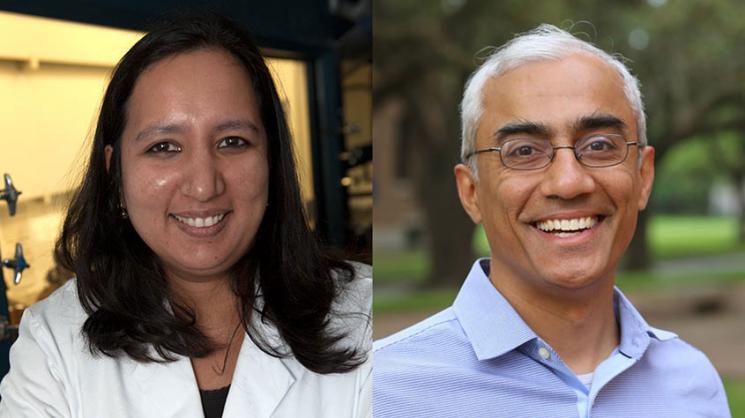 Two members of the George R. Brown School of Engineering faculty have been named to endowed chairs, effective July 1.

Her research focuses on using chemical, biological and engineering approaches to study soft materials such as colloids, polymers, lipids and surfactants. One of her principal concerns has been developing new materials using magnetic colloidal particles and characterizing multiphase flows in microfluidic systems.

Sabharwal earned his Ph.D. in electrical engineering from Ohio State University in 1999 and joined the Rice faculty that same year. He works in two distinct research areas: fundamental principles and novel experimental platforms for advanced wireless networking, contributions which led to his elevation to IEEE Fellow status in 2014.

He is the founder of WARP (Wireless Open-Access Research Platform), a scalable, programmable wireless platform used to prototype advanced wireless networks. WARP spawned Mango Communications, founded by Sabharwal’s Ph.D. student Patrick Murphy, and has been adopted by more than 150 organizations worldwide. He was awarded the 2019 ACM (Association of Computer Machinery) Test-of-Time Award for the WARP project.

Sabharwal is known for inventing full-duplex wireless, which doubles wireless network capacity and has been adopted for next-generation cable modems. For it he was given the 2017 IEEE Jack Neubauer Award and the 2018 IEEE Communications Society Award for Advances in Communications. He leads RENEW (renew-wireless.org), an NSF-sponsored National Wireless Testbed project, and co-leads the ARL-Rice RUNSRA Center.

More than a decade ago, Sabharwal started Scalable Health Labs, dedicated to advanced medical devices. His work in healthcare technologies has led to multiple startups and licenses. He is co-founder of Cognita Labs, which is developing two complementary digital technologies for the diagnosis and management of chronic lung diseases.

Sabharwal served as the chair of the ECE Corporate Affiliates program and as director of the Center for Multimedia Communication. His research has been funded by NSF, National Institutes of Health, Army Research Labs, IBM Research, Xilinx Inc. and Microsoft Research. He was awarded the 2018 Teaching and Mentoring Award by the Rice Graduate Student Association and the 2019 ACM Community Contributions Award.