The new faculty in five departments have joined or soon will join the School of Engineering as assistant professors. 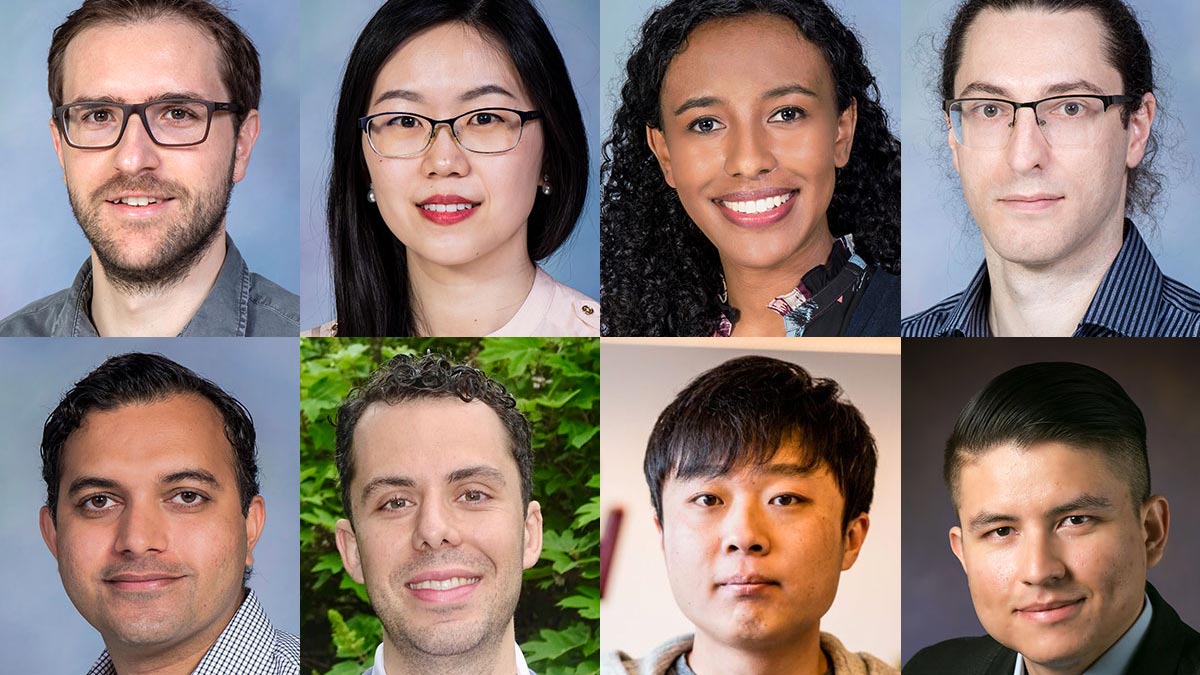 He earned his Ph.D. in nanosciences from the Italian Institute of Technology and University of Genoa in 2014, working on computational modeling of plasmonic structures. He received his B.S. and M.S. in engineering physics from Politecnico di Milano, focusing on nano-optics and photonics, in 2007 and 2009, respectively. In 2009 he completed his master’s project at the Technical University of Denmark, working on the optical characterization of metamaterials. In 2015, Alabastri was visiting researcher in the Molecular Foundry at Lawrence Berkeley National Laboratory. At Rice he was a postdoctoral fellow (2015-16) and NEWT postdoctoral leadership fellow (2016-18) working on theoretical nanophotonics and solar distillation devices. Since 2018 he has been a Texas Instruments Research Assistant Professor at Rice.

Getachew joins Rice after serving as a postdoctoral associate in materials science and engineering at MIT, where focused on the fabrication of electrically conductive water filtration membranes. She earned her B.S. in chemical engineering from Yale University in 2012, and her M.S. and Ph.D. in environmental engineering, also from Yale, in 2015 and 2018, respectively. At Yale she developed novel self-healing water filtration membranes, some using hydrogel-composite materials. Her lab at Rice will focus on evaluating different kinds of smart materials in environmentally relevant conditions, integrating them into water-treatment technologies, and designing new materials and composite structures.

Thyer earned his B.S. and Ph.D. from the University of Western Australia in 2008 and 2013, respectively. His doctoral work explored the use of orthogonal ribosomes as tools for synthetic biology, and demonstrated their ability to preferentially direct the incorporation of non-canonical amino acids. In 2013 he joined a research group in the Center for Systems and Synthetic Biology at the University of Texas at Austin as a postdoctoral fellow. There he developed a new biosynthetic and incorporation pathway for selenocysteine in bacteria which enabled the production of proteins containing diselenide bonds, and co-founded GRO Biosciences, a start-up biotechnology company in Boston using the technology to develop long-lasting protein therapeutics. The Thyer lab uses protein engineering and synthetic biology to develop environmentally friendly catalysts for bioproduction and bioremediation.

Unhelkar earned his bachelor’s and master’s degrees in aerospace engineering from the
Indian Institute of Technology in Bombay in 2012. From the Massachusetts Institute of Technology, where he worked in the Computer Science and Artificial Intelligence Laboratory (CSAIL), he earned an M.S. in aeronautics and astronautics and Ph.D. in autonomous systems in 2015 and 2020, respectively. His doctoral work resulted in novel algorithms to enable effective collaboration and information sharing in human-robot teams. Before joining Rice, Vaibhav served as a visiting researcher at X, the moonshot factory (formerly, Google X). His research interests include robotics, machine learning, decision-making and human-machine interaction. He develops algorithms and systems for human-in-the-loop AI and for deploying collaborative robots among humans. His goals are to improve transparency in AI-enabled systems and enable machines, both physical and virtual, to support humans.

Doss-Gollin is a postdoctoral scholar with the Keller Group in the Earth and Environmental Systems Institute at Pennsylvania State University. This spring he earned his Ph.D. in earth and environmental engineering from Columbia University, where he worked in the Columbia Water Center since 2015 and earned his M.S. in 2016. Doss-Gollin received a B.S. in mechanical engineering from Yale University in 2015. He is currently developing conceptual and computational frameworks to integrate hard and soft instruments for adaptive flood-risk management.

Hang is a postdoctoral associate working in the GRAB Lab at Yale University. He earned his Ph.D. in computer science, specializing in robotics and computer vision, from the KTH Royal Institute of Technology, Stockholm, Sweden in 2016. Before that, he received his M.S. in communication systems from the same university in 2012 and a B.S. in information engineering from Xi’an Jiaotong University, in Xi’an, China in 2010. He is interested in robotic systems that can physically interact with other robots, people and the world. By developing algorithms in optimization, learning, and control, his research is focused on efficient, robust and generalizable manipulation systems ranging from small-scale grasping and in-hand manipulation, to large scale dual-arm mobile manipulation and multi-robot manipulation.

Uribe is a postdoctoral associate in the Laboratory for Information and Decision Systems (LIDS) at MIT. He earned his Ph.D. in electrical and computer engineering from the University of Illinois at Urbana-Champaign. He also earned an M.S. in applied mathematics: optimization and algorithms from Illinois in 2016. In 2013 he received his M.S. in systems and control from the Delft University of Technology in The Netherlands, and in 2010 a B.S. in electronic engineering from the University of Antioquia in Medellín, Colombia. His research interests include distributed learning and optimization, decentralized control, algorithm analysis and computational optimal transport. He is interested in the design of scalable distributed optimization algorithms that execute over networks and perform as well as their centralized counterparts.