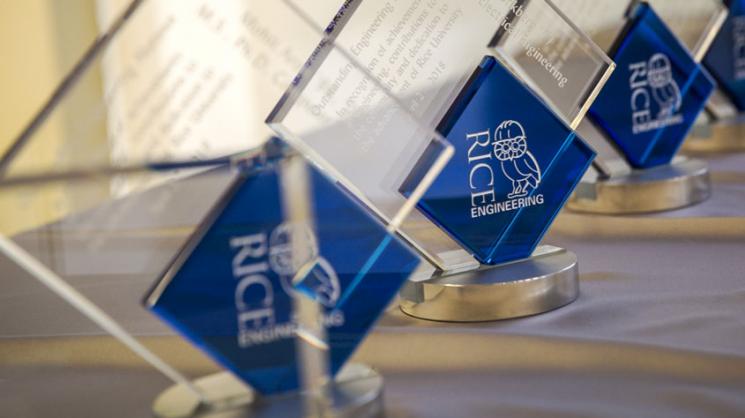 Eight alumni of the George R. Brown School of Engineering at Rice University have been honored for their “accomplishments and incredible impact,” in the words of Reginald DesRoches, the William and Stephanie Sick Dean of Engineering.

“We are here tonight to honor women and men who, after leaving Rice, have taken their intellectual curiosity, creativity and critical thinking and made significant contributions to the profession and society at large,” DesRoches told the 120 guests who attended the dinner and awards induction ceremony held April 27 in the Houston Club. The event was sponsored by the School of Engineering and the Rice Engineering Alumni Board.

The Distinguished Engineering Alumni Award recognizes “a lifetime of professional achievements, leadership and contributions made professionally and to society at large.” The 2018 recipients are:

Melbern G. (Mel) Glasscock, who earned his master’s degree in mechanical engineering from Rice in 1961. He worked for almost 20 years in the oil and gas industry and in 1980 founded Texas Aromatics, Inc., a petrochemical marketing company specializing in aromatic feedstocks, refined aromatics and olefins, gasoline blendstocks and heavy fuels. He serves as the company’s president and CEO. At Rice, Glasscock established the Alan Chapman Award for senior engineering students in honor of Alan Chapman, the former dean of engineering who taught for 60 years at Rice.

Wylie Bernard (Ber) Pieper, who earned a B.A. and a B.S. in civil engineering in 1953 and 1954, respectively. He joined Brown & Root Inc., an engineering, procurement and construction company based in Houston and owned by brothers Herman and George R. Brown. Halliburton Co. acquired Brown and Root in 1962. He moved to Halliburton’s corporate office in 1992 and was named vice chairman and COO in 1994. He retired from Halliburton in 1996, and now operates a private office, Pieper Interests. He served as a member of the Board of Trustees at Rice from 1996 to 2000.

Mohit Aron, who earned an M.S. and Ph.D. in computer science in 1998 and 2000, respectively. He founded Cohesity in 2013, and remains its CEO. In 2016, CRN recognized Cohesity on the list of Storage Emerging Vendors You Need to Know, and as one of the Top 25 Disruptors.

Mark Dankberg, who earned his B.S. and M.S. in electrical engineering in 1976 and 1977, respectively, and is co-founder, chairman and CEO of ViaSat Inc., a leading satellite communications firm. He was elected a member of the National Academy of Engineering in 2017 and is a member of the Rice University Board of Trustees.

Wendy Valka Hoenig, who earned her B.A. in materials science in 1986. She is president and CEO of H&H Business Development, a consulting firm that delivers technology and business assessments for start-ups and private equity companies. She is past president of the Board of Directors for the Rice Engineering Alumni.

Michelle LeRoux Williams, who earned a B.S. in mechanical engineering in 1995 and a Ph.D. in biomedical engineering from Duke University in 2000. She joined Aziyo Biologics as COO in 2014. Previously, she served as CSO of Osiris Therapeutics, where she led the development of five stem-cell products.

The Outstanding Young Alumni Award recognizes the achievements of engineering graduates who are younger than 40. This year’s honorees are:

Garrett J. Grolemund, who graduated from Rice with an M.S. and Ph.D. in statistics in 2012. After graduation, he joined RStudio, the free and open-source integrated development environment for R, a programming language for statistical computing and graphics. At RStudio, he is a data scientist and educator.

Christopher Powers earned a B.S. in chemical engineering in 2002. After graduation he went to work as a process engineer in Chevron’s Energy Research and Technology Company in Houston. He now serves as manager for maintenance and reliability at the Chevron refinery in Pascagoula, Miss.

DesRoches said to the award winners: “Your success burnishes Rice Engineering’s reputation for excellence in education and leadership. Thank you for everything you have done for Rice and the School of Engineering.”