Hunter Armistead '90, chief development officer for Pattern Energy, has learned from his failures. 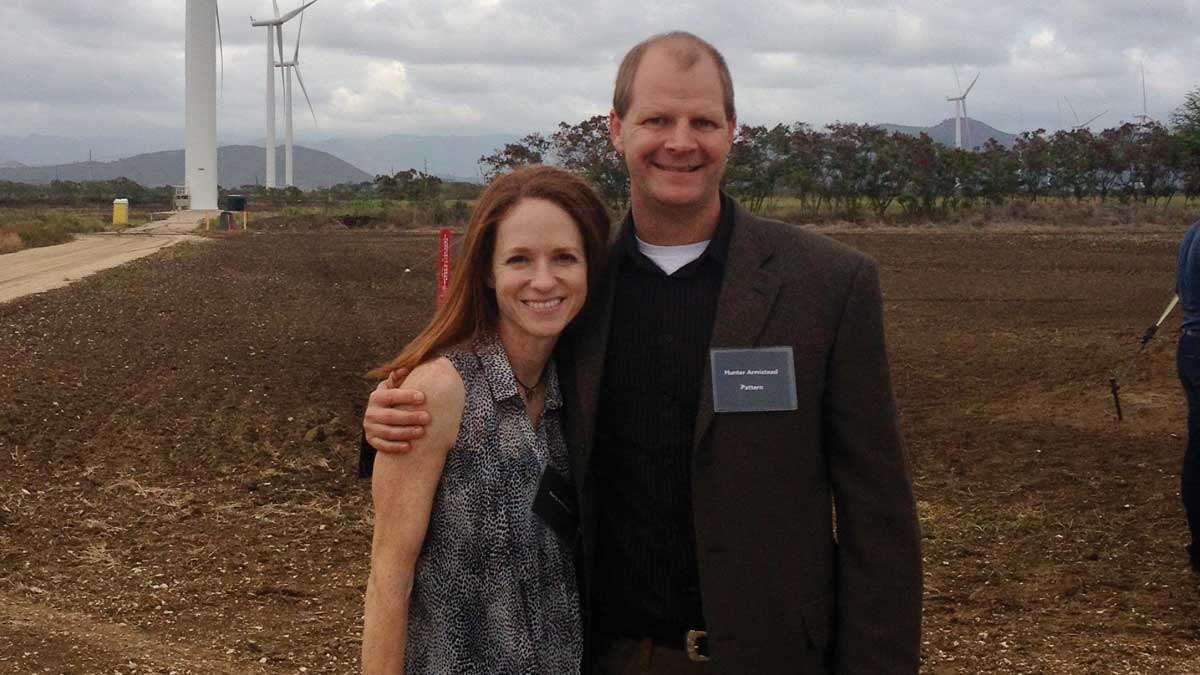 Among engineers and people in business the mantras are familiar: Failure is inevitable. Learn from your failures.

“Our projects did not work as planned and the market wasn’t ready. My time with Vedco taught me how energy and financial markets operate, so it was very valuable experience,” said Armistead, whose company today develops, owns and operates utility-scale wind and solar power facilities in the United States, Canada and Japan.

Though Armistead earned his B.S. in electrical engineering from Rice in 1990, he’s grateful that he took some classes outside his major, in accounting, economics and finance. “I found out I had a natural inclination for that and it came in handy later on,” he said.

After graduation, Armistead went to work for Honeywell as a control engineer, including a year spent in Pascagoula, Miss. at the Chevron refinery, on the Gulf Coast. “I learned a lot there, a lot about engineering and what I wanted to do.” Three years with Vedco followed, he said, “and that’s where I learned about project finance and how to raise capital. When it didn’t go well, that’s when I learned how tough it is succeed with a new company and, importantly, how to manage when things do not go as planned.”

Other jobs followed, at Conoco and Edison Mission Energy, followed by 10 years overseeing Babcock & Brown’s North American renewable energy business. In retrospect, it was all preparation for Pattern Energy. With the coming of the Great Recession in 2008-09, Armistead and his mentor at Babcock and Brown, Michael Garland, decided to form their own renewable-energy company and together they founded Pattern through a management buyout of the energy group from Babcock & Brown.

“The wind-energy business was then dominated by one or two players. We had a lot to learn,” he said. “Most of the benefits came in the form of tax credits and we learned how to create a market for tax credits to monetize.

“In 2009 we started with no assets and 80 people on the payroll. Now we have $7.5 billion in assets and we generate 4.4 gigawatts of renewable energy.”

The future second-in-command at Pattern was born in Austin, grew up in Houston and had his eyes on Rice from childhood. In high school he was drawn to math and science, and he planned to major in physics or electrical engineering. “It helped,” he said, “that Rice at the time was probably the most economical top-tier school in the country.”

For two years Armistead was on the Rice football team. “We were terrible,” he said, “and I was worse.” Then he joined the Rice cheerleaders, which is how he met his future wife, Kerry O’Neill, who graduated in 1992 with a B.A. in mathematical sciences. The couple has three sons, including their oldest, Cannon, who graduated from Rice this year with a B.S. in mechanical engineering.

“We’ve had tremendous success hiring Rice people at Pattern,” said Armistead, who serves on the Rice Engineering Advisory Board.

“Renewable energy, especially wind and solar, is our most economic energy solution today and is becoming the dominant source of energy for our future,” he said. “The only variable is how soon we can complete the transition away from fossil sources. Hopefully, Pattern will continue to be the force in driving this transition.”