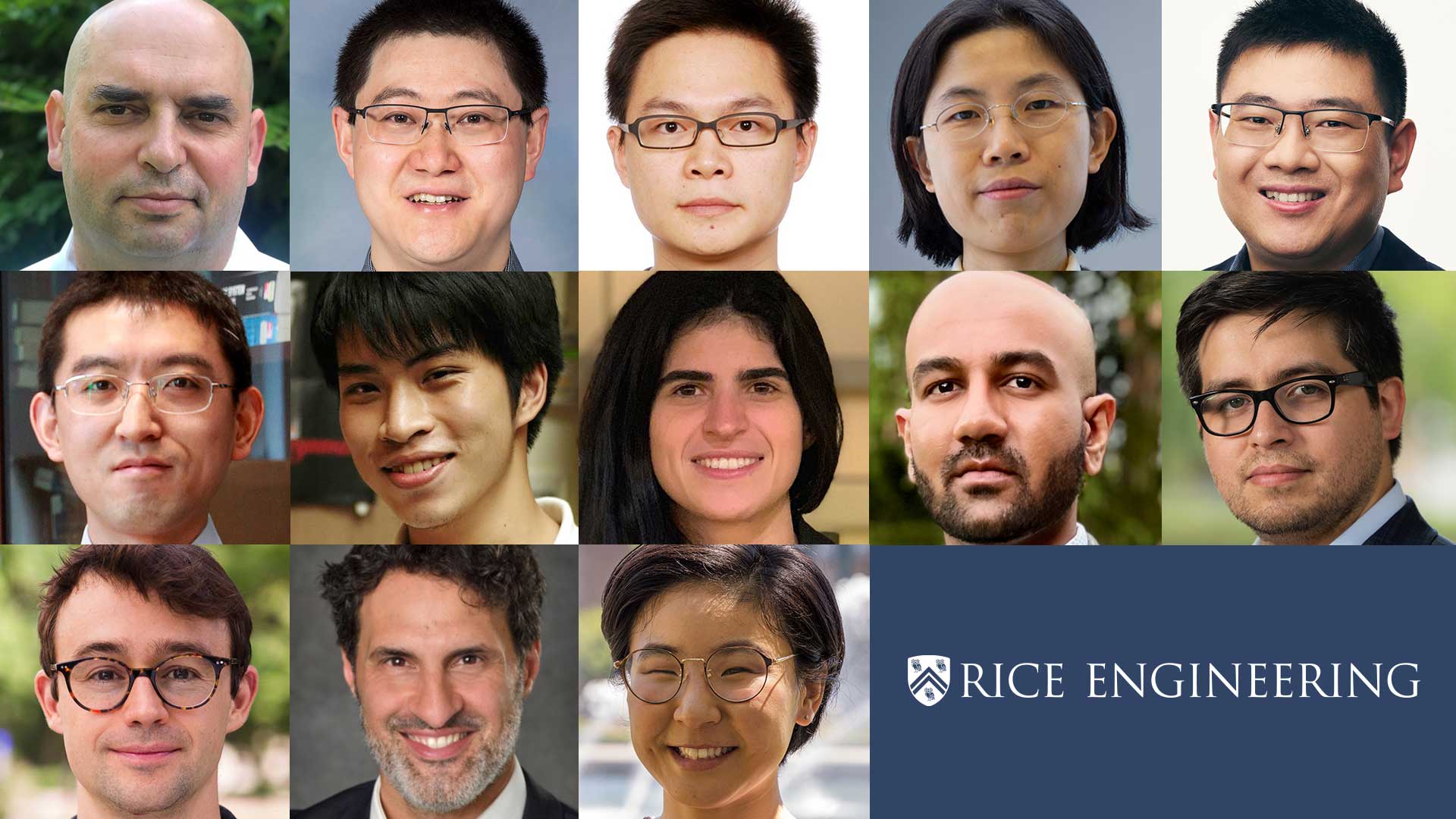 Nineteen new faculty members — including 13 tenure-track — in six departments and two programs have joined the George R. Brown School of Engineering. All started July 1, except where otherwise indicated.

Vladimir Braverman, professor of computer science (CS): He earned his Ph.D. in CS from UCLA in 2011. Before joining the Rice faculty, he was an associate professor of CS at Johns Hopkins University, with a joint appointment in applied mathematics and statistics. He has also served as a visiting researcher with Google Research. He is a recipient of the NSF CAREER award, Google Faculty Award and Cisco Faculty Award. His research areas include algorithms with applications in machine learning, radiomics, computer networks and single-cell genomics.

Mingjie Dai, assistant professor of bioengineering (BIOE): He earned his B.A. and M.Sci. in physics from the University of Cambridge, U.K., in 2010 and his Ph.D. in biophysics from Harvard in 2016. Since the following year he has worked as a Department Fellow at Harvard Medical School and a Technology Development Fellow at the Wyss Institute for Biologically Inspired Engineering at Harvard. His research interests include developing novel molecular technologies for understanding and interacting with biological systems, in particular building dynamic and functional nucleic acid-based circuits, and methods for sensitive detection (e.g. single-molecule) and accurate profiling of protein in the cell.

Kai Gong, assistant professor of civil and environmental engineering (CEE): He will join the faculty in January 2023. After earning his M.S. in civil engineering from Monash University in Australia in 2013 and his Ph.D. in CEE from Princeton University in 2020, Gong worked as a postdoc at Princeton and MIT. His research aims to help decarbonize important material flows by focusing on pressing and challenging materials science problems related to buildings and infrastructure. To achieve this goal, he combines atomistic simulations and advanced materials characterization with data-driven modeling.

Shengxi Huang, assistant professor of electrical and computer engineering (ECE): She earned her M.S and Ph.D. in electrical engineering and computer science from MIT in 2013 and 2017, respectively. Huang did postdoctoral research at Stanford, and was an assistant professor in electrical engineering, biomedical engineering and the Materials Research Institute at Penn State. Huang joined the Rice Quantum Initiative and directs the SCOPE (Sensing, Characterization, and OPtoElectronics) Lab. She has received an NSF CAREER Award and AFOSR Young Investigator Award. Her research focuses on light-matter interactions of quantum materials and nanostructures, and development of new quantum optical platforms and biochemical sensing technologies.

Lei Li, assistant professor of ECE: He will join the faculty in January 2023 as part of the Rice Digital Health Initiative. Li earned his Ph.D. in electrical engineering from Caltech in 2019 after earning an M.S. in electrical and systems engineering from Washington University in 2016. He served as a postdoctoral scholar at Caltech in medical engineering. He was selected as a TED fellow in 2021 and received the Charles and Ellen Wilts Prize from Caltech in 2020. In 2019 he was named to the “MIT Technology Review Innovators Under 35” list in China. Li’s research focuses on developing biomedical imaging technology that combines light, sound and artificial intelligence to study brain functions and diagnose cancer.

Shiqian Ma, associate professor of computational applied mathematics and operations research (CMOR): He earned his M.S. from the Institute of Computational Mathematics and Scientific/Engineering Computing, Academy of Mathematics and Systems Science, Chinese Academy of Sciences in 2006, and his Ph.D. in industrial engineering and operations research from Columbia University in 2011. Before joining the Rice faculty, Ma was an associate professor of mathematics at the University of California at Davis.

Chia Nai-Hui, assistant professor of CS: He earned his Ph.D. in computer science and engineering from Penn State in 2018. He worked as an assistant professor in the Luddy School of Informatics, Computing, and Engineering at Indiana University, Bloomington, from 2021 to 2022. He was a postdoctoral fellow in the Joint Center for Quantum Information and Computer Science and at the University of Maryland and at UT Austin. His research interests include quantum algorithms, quantum complexity theory and quantum cryptography. His research focuses on understanding quantum computing’s capabilities, limits and how it could change computer science.

Larissa Novelino, assistant professor of CEE: She is a postdoctoral researcher in civil engineering at Georgia Tech where she earned her Ph.D. in civil engineering in 2021. Her research focuses on applying principles of origami to engineer deployable, reconfigurable and multifunctional systems. In 2015, Novelino earned her M.S. in the same field from the Pontifícia Universidade Católica do Rio de Janeiro in 2015.

Tirthak Patel, assistant professor of CS: He will join the Rice faculty in July 2023 as part of the Rice Quantum Initiative. Patel is a computer engineering Ph.D. candidate at Northeastern University, doing systems-level research at the intersection of quantum computing and high-performance computing. His research explores the trade-offs among factors affecting reliability, performance and efficiency. He is the recipient of the ACM-IEEE CS George Michael Memorial HPC Fellowship and the NSERC Alexander Graham Bell Canada Graduate Scholarship (CGS D-3).

Sebastian Perez-Salazar, assistant professor of CMOR: He earned a Ph.D. in algorithms, combinatorics, and optimization (ACO) from Georgia Tech this 2022, and a B.Eng. and M.S. in applied mathematics in 2016, both from the Universidad de Chile in Santiago. Perez-Salazar is broadly interested in operations research and optimization under uncertainty. He works on models and applications of decision-making under uncertainty, and much of his current work is motivated by applications in cloud computing and e-commerce.

Kevin Slagle, assistant professor of ECE: He earned his Ph.D. in theoretical condensed matter physics from the University of California, Santa Barbara in 2016 and was a postdoctoral fellow at the University of Toronto and a Sherman Fairchild Postdoctoral Scholar at Caltech. He received a Barry M. Goldwater Scholarship in 2010. His research focuses on the theory of emergent phenomena in quantum matter and fundamental physics. This includes the theoretical study of superconductivity and topological orders, along with their experimental realizations within quantum simulators and other highly tunable platforms. He is a member of the Rice Quantum Initiative.

Frederi Viens, professor of statistics (STAT): He earned his M.S. and Ph.D. in mathematics from the University of California, Irvine, in 1991 and 1996, respectively. Viens was professor of statistics and mathematics, and director of the Computational Finance Program, at Purdue University from 2000 to 2015. He is a fellow of the Institute of Mathematical Statistics. In 2010-11 he served as science adviser to the U.S. Assistant Secretary of State for African Affairs in Washington DC. Viens’ research interests include probability theory, stochastic processes, mathematical statistics, applied probability for insurance mathematics and quantitative finance, and Bayesian modeling in agroecology and nuclear physics.

Momona Yamagami, assistant professor of ECE: She will join the faculty in July 2023 as part of the Rice Digital Health Initiative. She expects to earn her Ph.D. this year, in ECE from the University of Washington, where she earned her M.S. in 2019. Yamagami earned a B.S. in BIOE from Rice in 2016. She served as an instructor at the University of Washington in Control System Analysis and as the Microsoft Research Ph.D. intern in 2020. She is the recipient of the Facebook Research Award of $150,000 for her proposal “Framework for Diverse EMG Gesture Recognition.” Her research focuses on improving the accessibility of human-machine interfaces for people with and without limited motion using data-driven modeling, control theory and wearable sensor technologies.

Kamisha Escoto, lecturer in ACTIVATE, the Engineering Communications Program: She earned her M.S. and Ph.D. in industrial engineering from the University of Wisconsin-Madison in 2002 and 2006, respectively. For two years starting in 2009, she served as a postdoctoral fellow at the University of Minnesota in an NIH-funded program on eating and weight disorders. Since 2012, she has worked for the MD Anderson Cancer Center in Houston, currently as a program director for its Center for Community-Engaged Translational Research in the Department of Health Disparities Research.

Mary Glavan, assistant teaching professor in ACTIVATE, the Engineering Communications Program: Glavan earned her M.A. and Ph.D. in rhetoric from Carnegie-Mellon in 2010 and 2017, respectively, and will work closely with Anne-Marie Womack, assistant teaching professor in the Engineering Communications Program. Since 2019, Glavan has served as a visiting assistant professor of English in the Writing Program at Tulane University. Earlier, she served for four years as a consultant in Carnegie Mellon University’s writing center, working almost exclusively with multilingual graduate writers, primarily in STEM fields. She will join the Rice faculty on Jan. 1.

Bo Jones, Pfeiffer Postdoctoral Instructor in CMOR: He earned his Ph.D. this year in industrial and systems engineering from the University of Southern California, and his B.A. in applied mathematics from Claremont McKenna College in 2017.

James Long, instructor in bioengineering: Long earned his M.S. and Ph.D. in biomedical engineering from Duke University in 2021 and 2022, respectively. He received his B.S. in BIOE from Rice in 2017. In 2019 he received an NSF Graduate Research Fellowship. His research interests include clinical applications of adaptive imaging and image quality characterization.

Leif Peterson, lecturer in statistics: He earned his M.P.H. in radiological physics from the University of Michigan, and his Ph.D. in epidemiology-biostatistics from the University of Texas Health Science Center. He is principal of NXG Logic, a data analytics software startup, and works as a consultant in biostatistics, bioinformatics, machine learning and neural networks. Peterson served as director of the Center for Biostatistics at Houston Methodist Research Institute and as professor of bioinformatics and biostatistics in its Institute for Academic Medicine. He is a member of the Institute for Electrical and Electronics Engineers and of its Computational Intelligence Society.

Samira Saedi, lecturer in Professional Master’s Program in Industrial Engineering: She earned her Ph.D. in industrial engineering from the University of Houston in 2013, and her M.S. and B.A. in the same field from the University of Science and Technology in Tehran, Iran. In 2013 she served as a postdoctoral fellow at MD Cancer Center in Houston. She went to work for Texas Children’s Hospital as a process engineer in 2015, and in 2021 became assistant director for Healthcare System Engineering.